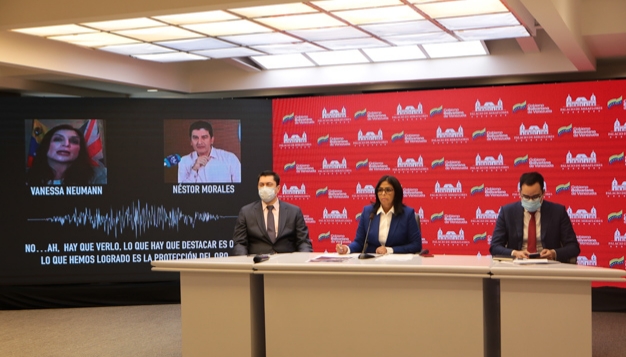 Venezuelan health authorities registered 211 new infected with COVID-19, in the last 24 hours, of which 157 are community-based and 54 are of international origin, bringing the total number to 6,273 infected people in Venezuela.

This was announced by the Executive Vice-president of the Republic, Delcy Rodríguez, during the balance of COVID-19 addressed at the Venezuelan people, in which she also reported that unfortunately the deaths rise to 57, after the death of 3 people due to the infection.

Vice-president Rodríguez specified that of the 157 cases of community transmission, 54 belong to the Zulia state, 32 are in Sucre, 20 in Carabobo, 13 in Yaracuy, 12 in the Capital District, 9 in Miranda, 8 in Táchira, 4 in Bolívar, 2 in Aragua, 2 in Monagas and 1 corresponds to Anzoátegui.

Regarding the 3 deceased, the Vice-president of the Republic explained that the first of them is an 83-year-old woman from Yaracuy state, and the remaining two from Zulia state, a woman of 65 and a man of 53 years.

“On behalf of President Nicolás Maduro, we extend our condolences to their relatives, and friends, because we know how painful, are the moments and hours of sadness that they must be going through”, she said.

Referring to the number of COVID-19 screening tests applied in the country, she reported that to date, 1,283,692 tests have been carried out to diagnose COVID-19, which represents 42,789 tests per million inhabitants.