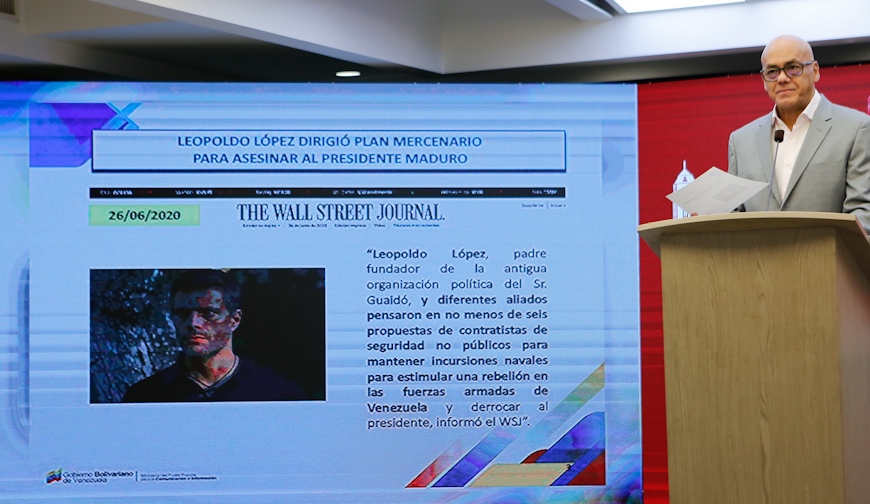 From the Miraflores Palace, Rodríguez referred to an article published on June 26 by the American newspaper The Wall Street Journal, which details the participation of Leopoldo López as a key actor in planning the failed operation Gideon.

According to the article, in the Spanish diplomatic headquarters, the leader of Voluntad Popular party held meetings to evaluate details of what would be the terrorist act that was attempted to materialize on the coasts of Macuto, La Guaira state, on May 3.

Rodríguez said that López and the deputy Juan Guaidó, met with up to six private security companies in order to seal a contract to illegally overthrow the constitutional government of the President of the Republic, Nicolás Maduro.

“Does the ambassador of Spain and the government -of Spain- know that Leopoldo López has made and continues to make repeated videoconferences with the sole purpose of insisting on his plans to assassinate President Nicolás Maduro? (…) Does the ambassador (…) and the Government of Spain agree that these meetings have taken place at the headquarters of his residence?” Asked the Vice-president.

The Vice-president of Communication, Culture and Tourism also denounced that the leader of Voluntad Popular party, Leopoldo López, currently a fugitive from justice and residing in the Spanish Embassy, ​​maintains pressure on the opposition sector called “G4” to remain in the path of violence.

He added that López has demonstrated that through democratic channels he will not be able to obtain any space for political power in Venezuela, which is why he has become involved in terrorist acts.

According to an article published by The Wall Street Journal, “several members of Voluntad Popular have resigned from the party, saying privately that they could no longer deal with the tough hand of López.”

Meanwhile, Guaidó’s actions, immersed in the sabotage of all negotiation efforts to seek a consensual and concerted agreement between the Government, the forces of Chavism and the various oppositions in Venezuela, have led to a greater decay in the adverse forces to Bolivarianism.