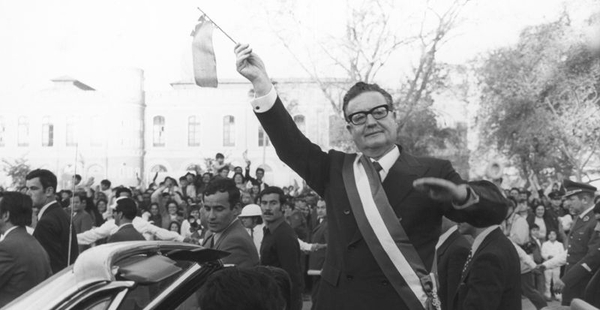 112 years after Salvador Allende’s birth on June 26, his legacy as former president and socialist politician is kept alive and inspires the protests staged by the Chilean people since October 2019, keeping up the fight against Sebastian Piñera’s neoliberal and repressive regime.

The world’s first socialist president to take office after winning democratic elections is also an iconic example of the U.S. imperial meddling and economic blockade to push a political regime change, which was forced in Allende’s Chile after a coup d’état.

Salvador Guillermo Allende Gossens was born to a wealthy family in Santiago on June 26, 1908. He studied medicine and joined left-wing political movements since he was a student at the University of Chile.

He ran for President on four occasions. Before winning the presidential elections in 1970, he was a lawmaker, senator and Minister of Health.

Allende came to power with the support of Unidad Popular (Popular Unity), a left-wing coalition of parties. His administration stood out as he tried to establish a socialist state through the implementation of democratic measures means such as the nationalization of the copper industry, strategic areas of Chile’s economy and a land reform.

However, as a direct consequence of a blockade imposed by the United States, Allende’s administration was crippled by a high inflation, a contraction in productive capacity, closure of companies due to lack of resources and problems in the distribution of food and goods.

The Government of the socialist leader came to an abrupt end after a coup d’état on September 11, 1973, when the Armed Forces planes and tanks, as well as the Carabineros (policemen), sponsored by U.S. interests, bombarded Palacio de La Moneda three years before the end of Allende’s constitutional term. After he was overthrown, General Augusto Pinochet led a brutal and repressive military dictatorship for more than 16 years.