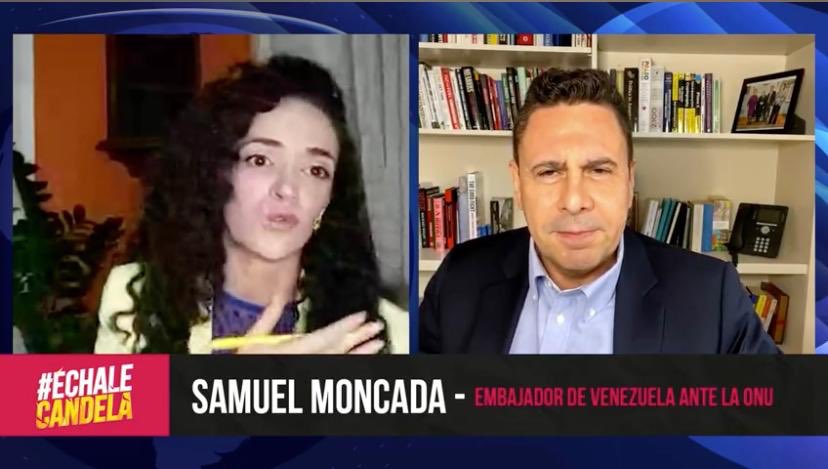 Ambassador Samuel Moncada: ‘Trump’s racism is a danger to humankind’

In an interview with Red Radio Venezuela (RedRadioVe), the Venezuelan ambassador to the United Nations Samuel Moncada talked about the history of the United States, the challenges of current politics, and the historical impact of sanctions against Venezuela.

Likewise, in the virtual interview conducted by journalist Osly Hernández, Moncada discussed and analyze the controversial book by the U.S. former national security advise John Bolton titled The Room Where It Happened: A White House Memoir.

The Venezuelan ambassador explained that this book is a textual reflection of the U.S. president’s intentions to invade Venezuela and take it over as one more colony to loot its gold in the Bank of England.

“Bolton textually says in his book: ‘Trump insisted he wanted military options for Venezuela and then keep it because it’s really part of the United States’.”

Likewise, Moncada pointed out everything Trump does is to be reelected as President; that’s why he uses Juan Guaidó as a tool for his interests in Venezuela.

Moncada said that despite Guaidó is a “U.S. puppet,” the U.S. president has not hidden his contempt for the opposition lawmaker. “Today Trump was asked again about what he thinks of Guaidó, and he affirmed that “the guy has nothing.”

About Trump’s colonial aspiration to annex Venezuela to the U.S., Ambassador Moncada said it is a racist idea, an imperial aspiration, typical of the Monroe Doctrine, to loot Venezuela.

Regarding the imposition of unilateral coercive measures by the United States, the Venezuelan diplomat said that the South American country has been calling for the lifting of these measures amid the COVID-19 world contingency, but it has not obtained any results since the U.S. is determined to worsen them.

“Currently, the United States imposes sanctions and has blocked 39 countries in the world, that is to say that a third of the world’s population is under the U.S. economic siege (…) It is a crime of extermination what they are trying to do against Venezuela,” he denounced.

In the interview, he also talked about the illegal confiscation of Venezuela’s gold in England. The ambassador said that “the Bank of England says it does not recognize President Maduro because the British government does not recognize him. And the British government says that the Bank of England is independent (…) That is a shameless, pitiful excuse to loot Venezuela and mock international law.”

The Venezuelan diplomat also urged the countries of the world to understand the serious nature of Trump’s government regarding international relations and to unite against coming adversities.

“Trump’s racism is a danger to humankind (…) We must be ready; we are living unique times. Unity for all the patriots!” he said.