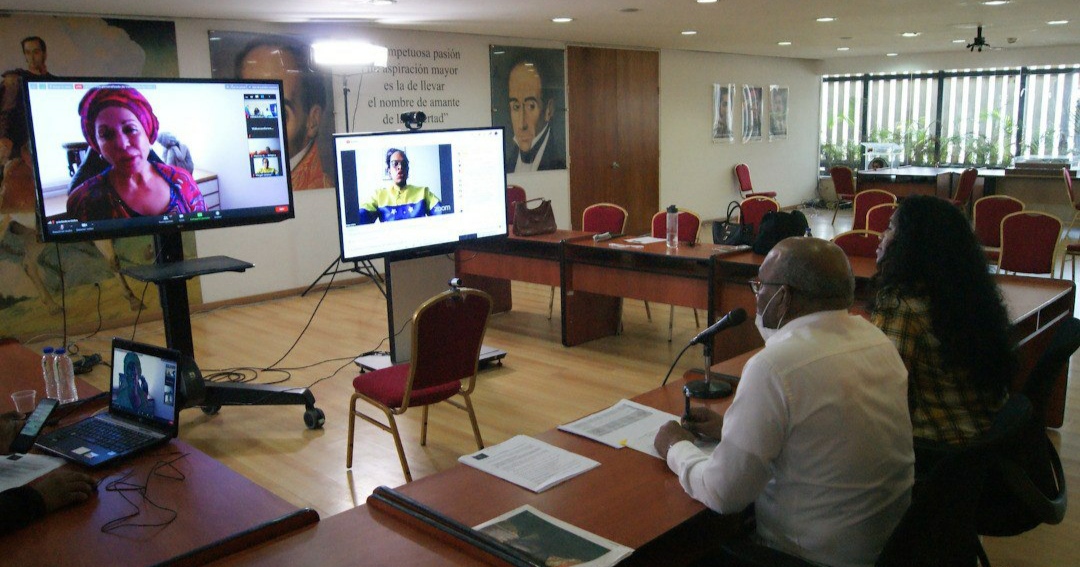 In order to raise awareness of the experiences of Afro-descendent people amid the pandemic, an online forum themed “Afro-responses in the face of racism in the context of COVID-19” was held and organized by the International Anti-Imperialist Cumbe of African and Afro-Descendants.

President of the Bolivarian Republic of Venezuela Nicolás Maduro participated in the conference via a phone call and pointed out that “racism is the son of slavery and colonialism.”

Regarding the importance of this forum to strengthen the Afro-descendent people’s unity, the Venezuelan president expressed that “this meeting is the continuation of initiatives that we have undertaken to coordinate the fight of social movements for justice and against racism, colonialism and oppression,” he said.

In this regard, Maduro highlighted that “the Venezuelan people has a lot of strength and conscience. They cannot keep us down. Our people are standing up. Venezuela shows its solidarity with the fight for equality, for a better and new society,” said the Venezuelan president.

President Maduro explained that “more than 1.7 million tests have been done with an average of 35,781 tests por 1 million population.”

“We have made huge efforts to detect coronavirus and provide our people with treatment,” he stressed.

The fight goes on

Leaders from more than 40 countries participated in tis virtual forum as a space for the coordination of liberating practices promoted by afro-descendants in the world whose situation has worsened due to the COVID-19 pandemic.

On behalf of Venezuela, Vice-president for Development in the Social and Territorial Area Aristóbulo Isturiz attended the forum.

“Once again, today afro-descendants unite. Today we need unity. We need to keep on fighting. We need to support insurrections and uprisings in all the countries where a reaction is produced,” said Istúriz.

“We cannot overlook what is happening in the world, the death of George Floyd provoked a great mobilization (…) We condemn the violation of human rights by the Trump’s government against the afro-descendent population. We claim international solidarity and express our solidarity,” he stressed.

“Conquest and colonization are historical facts of the current international order and the power that has marked our societies until today,” said Istúriz.

Roraima Gutiérrez, secretary-general of the International Anti-Imperialist Cumbe of African and Afro-Descendants, asserted: “United, we are a force, and the system knows it. We are not only united by racism as a problem taking place in the U.S., Europe and many other parts of the world. You can see how the people of the Dominican Republic was recently repressed for protesting against racism. Starting from these reflections, we need to move forward to defend our right and the fundamental right to life.”

Likewise, Gutiérres highlighted the historical element. ” We can recall the 18th and 19th centuries, when an African and Afro-descendent army defeated Napoleon Bonaparte’s army, one of the most powerful ones by then, in a Caribbean territory in 1804 where Africans and Afro-descendants achieved unity. We are an impressive force, and the system knows it. This system that changes its forms of discrimination and racism knows that we are a powerful force; that’s why it seeks to divide us and weaken us. That’s why we are called to the unity of our forces,” she said.

Piedad Córdoba, former Colombian senator and consultant of the International Anti-Imperialist Cumbe of African and Afro-Descendants, added that “the Cumbe is a very important space to move forward as Afro-descendants because it offers us the possibility of working together with other countries.”

In this regard, former Brazilian senator Dulce María Pereira commented that “this pandemic has shown a reality if we look at the figures. For example, 56% of the black population remains outside the education system. And something that has an extraordinary impact is that there are nearly 22 million Brazilians who do not have access to water,” she expressed.

“One of our first actions has been to expose these elements of the pandemic and demand specific data on COVID-19 from the government,” concluded the Brazilian social fighter.

In his closing speech, Aristóbulo Istúriz read an excerpt of a poem titled “I can’t breathe”, written by Antonia Bencomo to honor George Floyd.