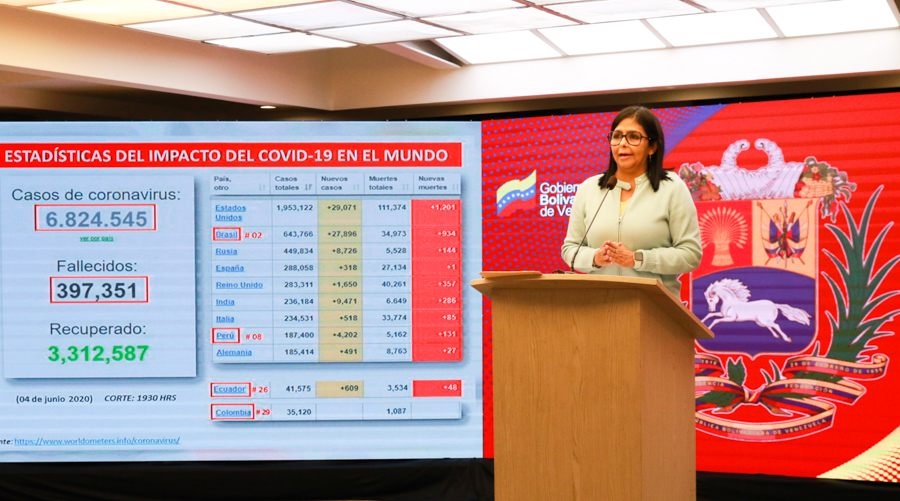 In the last 24 hours, 58 positive cases of COVID-19 have been detected in Venezuela, bringing the number of infections to 2,145, the Executive Vice-president of the Republic, Delcy Rodríguez, reported from the Simón Bolívar press room of the Miraflores Palace on Friday.

Of the new infections, she reported that “88% of the cases are imported: 39 are from Colombia, 23 entered through Táchira, 16 through Apure; 7 come from Ecuador, 2 from Peru, 3 are the product of international contact and are located in an indigenous Pemón community in Bolívar state”.

She stressed that the Bolivarian Government continues the massive and personalized screening for the detection and containment of respiratory infection and has overcome the barrier of one million COVID-19 detection tests, which represents 33,656 per million inhabitants.

She pointed out that despite the media siege and the economic, financial and commercial blockade imposed on Venezuela since the Donald Trump administration, the Bolivarian Government continues to provide a comprehensive response to socio-economic and health care to these compatriots.

In order to guarantee the containment of the virus, in the framework of the return of these Venezuelan migrants, social care centers are arranged in border areas where they are received under the epidemiological protocols recommended by the World Health Organization (WHO), tests of screening are applied and are subjected to a mandatory quarantine of 14 days, after not having the disease, they are transferred to their states of origin.