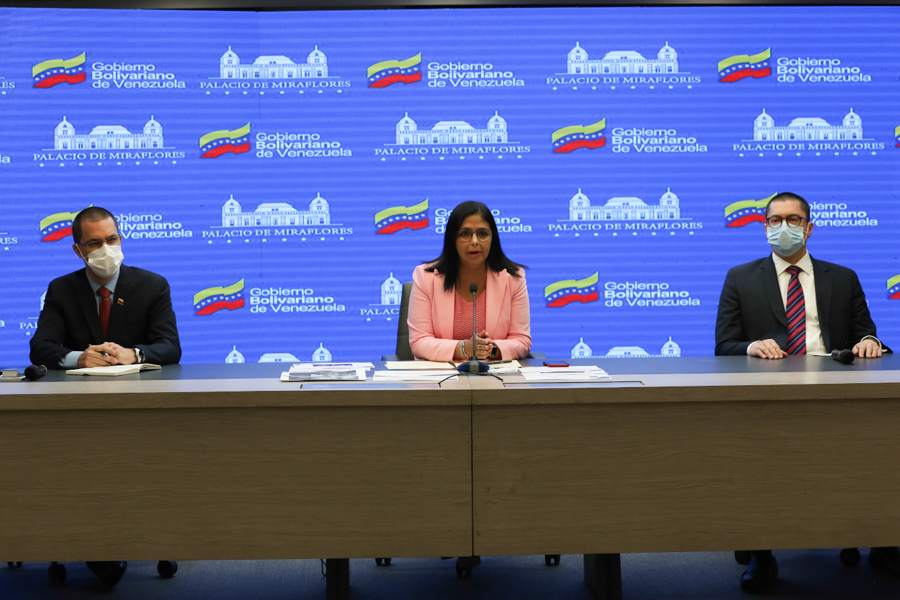 The Executive Vice-president of the Republic, Delcy Rodríguez, reported on Tuesday that next Thursday, May 28, the Bolivarian Government will assume a hearing in the English courts on a lawsuit filed on May 14 by the Central Bank of Venezuela (BCV) against the Bank of England, for the illegal retention of gold reserves valued at approximately one billion dollars.

In the company of Foreign Minister Jorge Arreaza and other authorities of the Venezuelan State, the Vice-president presented a chronological report of the case and the participation of the criminal organization led by opposition deputy Juan Guaidó.

She explained that the claim before the English courts for the return of those international reserves was introduced by the BCV after multiple steps, in its capacity as a client under the contract signed in 2008 with the Bank of England to serve as depositary of part of the Venezuelan gold.

She recalled that recently the Foreign Minister Arreaza delivered a note of protest to the Chargé d’affaires of the United Kingdom in Venezuela, for the creation in the Ministry of Foreign Affairs of that country of an “Office for the Reconstruction of Venezuela”.

The senior official compared the Venezuelan gold case to the theft by the United States government of Libya’s reserves in 2011, when the African nation was stripped of $30 billion.

She added that something similar would have happened in Venezuela if the mercenary raid on May 3 had been successful, since the contract signed by deputy Juan Guaidó with the US company Silvercorp established that the invaders would keep 14% of everything they found in the programmed attacks against public institutions and private companies.

Vice-president Rodríguez also reported that President Nicolás Maduro requested that an investigation of the Venezuelan gold case be initiated in the national judicial organs in parallel and that it also be taken to the International Criminal Court, where a remission for crimes against humanity due to the unilateral coercive measures imposed by the United States Government already lies.

“We will exercise all the corresponding actions for the defense of Venezuela’s international reserves”, she concluded.