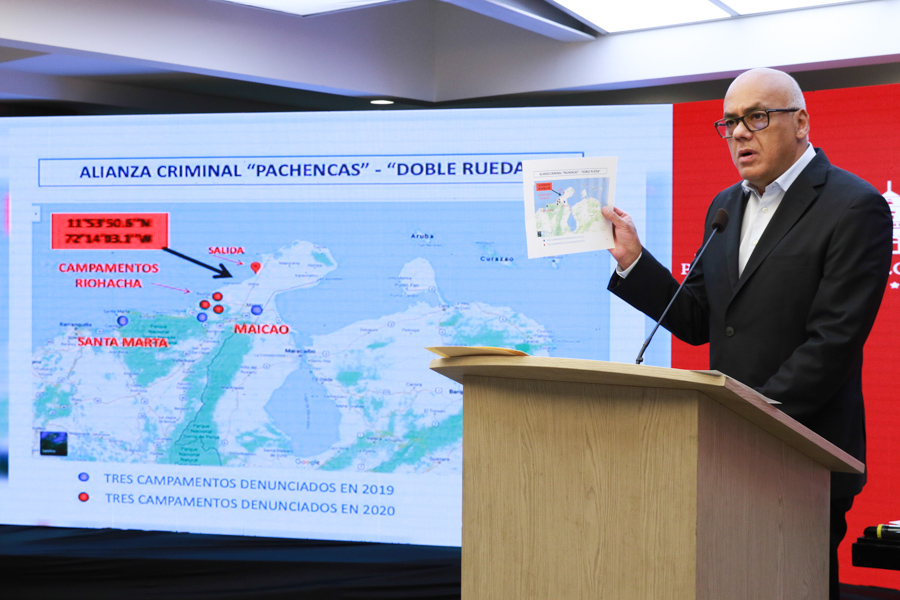 A paramilitary organization called “Los Pachenca”, which operates in the Santa Marta’s Sierra Nevada, Barranquilla, Riohacha, La Guajira and the Colombian northern coast, supplied weapons to the small group of deserters that participated in the failed armed incursion against Venezuela on May 3, denounced Sectorial Vice-president of Communication, Culture and Tourism Jorge Rodríguez.

“Los Pachenca”, explained Rodriguez, provided assistance in the installation, logistics and transportation of mercenaries during their training in Colombian camps.

At the Miraflores Presidential Palace, in Caracas, Rodriguez pointed out that “Los Pachenca” shared their duties as arms suppliers with Elkin Javier López Torres, nicknamed Doble Rueda, with whom they have a close relation.

Rodriguez quoted the testimony of U.S. mercenary Luke Denman to highlight that drug trafficking groups are used by the lawmaker of the National Assembly in contempt Juan Guaido as a “third way” in the event the coup-mongering maneuver failed.

Rodriguez stressed that a common element in the volunteer testimonies of the arrested men is remarks on clashes between Clíver Alcalá Cordones and Juan Guaidó, a situation that confirms the reason why Alcalá was kicked out from Operation Gideon.

In a video confession, Luke Denman affirmed Guaido and Jordan Goudreau, owner of Silvercorp USA, kept direct contact during the planning of the failed armed incursion.

Denman explained that Guaido chose Silvercorp because he assumed it had close ties with the Donald Trump’s administration.

Denman stresses that the leader of extreme right-wing party Voluntad Popular (VP) made “incorrect decisions” and “misled the group”.

In addition, he said that Goudreau was in permanent contact with mercenaries in training camps in Riohacha and La Guajira.