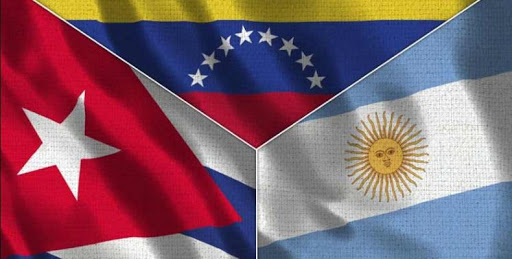 Argentina pleads for lifting of blockade against Cuba and Venezuela

Amid the world’s difficult fight against COVID-19, Argentinian President Alberto Fernández pleaded again on Monday, May 11, for the lifting of the blockade imposed by the United States on Cuba and Venezuela after pointing out that it mainly affects the people.

In an interview with a local radio station, the Argentinian president stressed that in the face of the pandemic governments should care for their people, who are the victims of unilateral decisions that subject them to a blockade preventing them from accessing medicines and giving wat to a worrisome situation of humanitarian interest that goes beyond politics.

President Fernández has pleaded for the creation of a Humanitarian Emergency Fund on different occasions, including the virtual meeting of presidents of the G-20 Group.

By mid-April, he supported the Declaration of the Puebla Group, comprised by the region’s center-left leaders such as Dilma Rousseff and Lula Da Silva (Brazil), Rafael Correa (Ecuador) and Fernando Lugo (Paraguay), who have also rejected the pressure exerted by the White House on Cuba’s and Venezuela’s governments.

The Puebla Group has also rejected the deployment of US military forces near the Venezuelan Caribbean under the pretext of an alleged fight against drug trafficking, as announced by President Trump in early April.

Venezuelan Foreign Minister Jorge Arreaza mentioned the Argentinian president’s statement on his Twitter account @jaarreaza, stressing that his call is based on a humanitarian need.