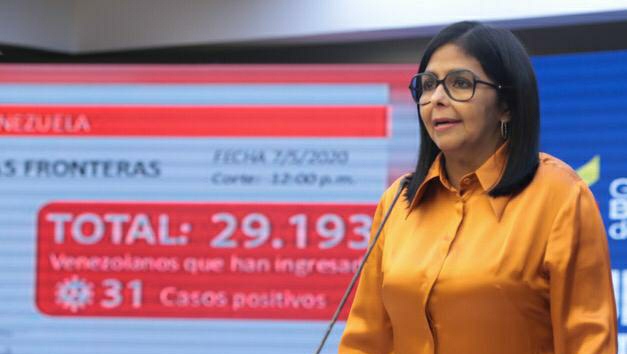 “Today, a virtual meeting of the World Health Organization was held to exchange national experiences. In the case of the Americas region, it was Venezuela’s turn to represent our nation”, This was reported by the Executive Vice-president of the Republic, Delcy Rodríguez.

From the Miraflores Palace, Rodríguez explained that the People’s Power Minister for Health, Doctor Carlos Alvarado, “reported on the progress we have had, based on our experiences, where 60% of our cases are asymptomatic; that is, 109 cases have no symptoms or physical evidence related to COVID-19”.

The Executive Vice-president also highlighted that “another point (that the Minister) reported was about Broad and Personal Screening. We already have 502,771 COVID-19 detection tests, with 16,750 tests per million inhabitants”.

“He also thanked the United Nations System, the Pan American Health Organization and the WHO, as well as countries such as China, Russia and Cuba for humanitarian technical assistance, to deal with COVID-19 in Venezuela”, she added.

In this virtual information session, health ministers from around the world, from all continents, government representatives and diplomats worldwide participated. This is the third information session convened by the WHO, where the countries of the six regions that make up the Organization are invited.