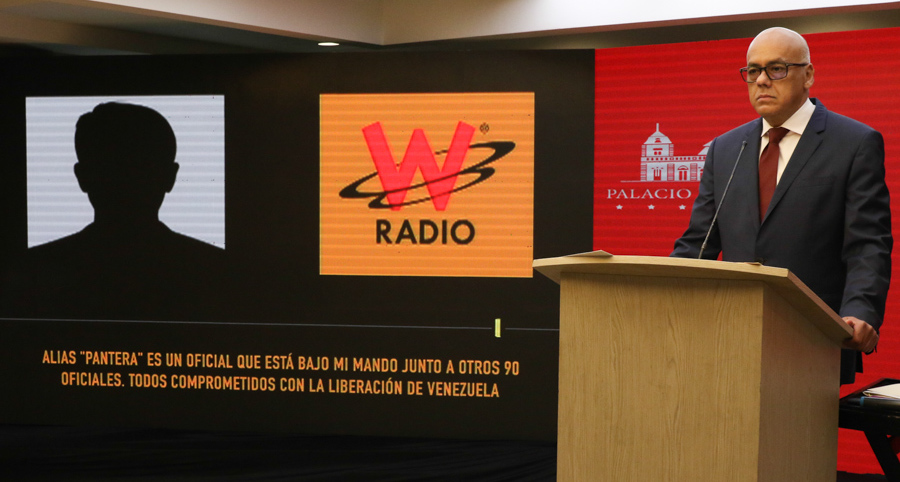 “This man, Jordan Goudreau, is the owner of a company called Silvercorp, which is nothing more than a company that rents mercenaries and assassins and sends them to destroy and sow havoc in different zones of the planet,” he said.

Pictures and footage offered by Communications Vice-president Jorge Rodríguez show how Jordan Goudreau led security staff for US President Donald Trump, clearly proving that the US administration is linked with this contractor and therefore is involved in terrorist actions recently carried out against Venezuela.

“How come the US Secret Service hires Silvercorp to provide security to Donald Trump? How come Silvercorp publishes it on its web page?” asked Rodríguez.

Likewise, he asserted that the contact between Juan Guaido and Jordan Goudreau was Sergio Vergara, a man who stole the money aimed at covering the costs of accommodation for the military deserters in Colombia.

Furthermore, Rodríguez unveiled a recorded conversation between Guaido and the US mercenary. In the conversation, “Guaido acknowledges he signed a contract with Mr. Jordan Goudreau. Cliver Alcalá Cordones was not lying,” he stressed.

The signatories of this contract include Jordan Goudreau, Juan Guaidó, Sergio Vergara, Juan José Rendón and Manuel Retureta, who “is a criminal attorney and partner of Retureta & Wassem at the service of Latin American drug traffickers, as the news portal La Tabla published today,” he said.

Rodríguez described this action as “barbarism” and “a stupidity” as killers were hired to instigate unfortunate events in Venezuela.

He read some excerpts from a writing by former US to the Organization of American States Roger Noriega, who described the Venezuelan opposition as a mess, “a helpless opposition.”

Who is Jordan Goudreau?

Goudreau is a retired US soldier who was a mercenary in Iraq and Afghanistan. He is one of the people involved in the failed military incursion called Operation Gideon, which took place on Sunday, May 2, in Macuto, La Guaira State.

In 2018, he founded his own firm, Silvercorps USA, a private security company based in Florida.

In February 2019, he was the head of security of the Live Aid concert organized by British billionaire Richard Branson. This concert was only a smokescreen whose only goal was to launch an invasion from Colombia.

The same year, opposition leader Lester Toledo was in charge of connecting Goudreau with deserter Clíver Alcalá Cordones in Colombia.

On March 26, 2020, Alcalá Cordones revealed during an interview with a Colombian radio station that Juan Guaido and Jordan Goudreau signed a contract for a military incursion and assassinations in Venezuela.

Noteworthily, Venezuela’s civic-military unity has intercepted and neutralized terrorist actions in many opportunities. The joint work of the people and the country’s security forces have guaranteed peace and security in Venezuelan soil.