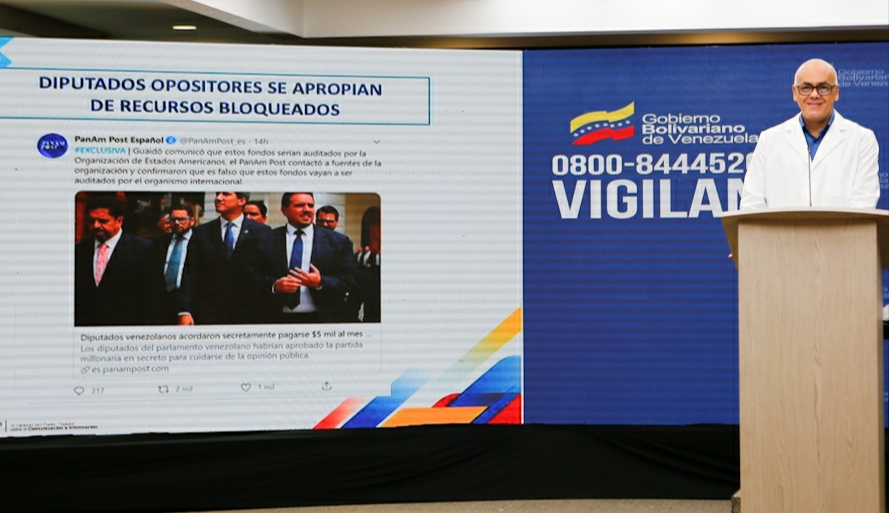 Vice-president of Communication, Culture and Tourism Jorge Rodríguez denounced on Friday, April 24, the continuation of the media war fostered by the U.S empire, the Colombian and the Venezuelan extreme right wing to downplay the Bolivarian Government’s progress.

Rodríguez stated that these extreme right-wing sectors “insist on spreading lies, waging a psychological war and reducing the self-esteem of Venezuelans to make them feel psychologically defeated,” and he mentioned a report published by U.S. newspaper The Washington Post on March 20 titled “Venezuela’s broken health system is uniquely vulnerable to coronavirus. Neighbors are afraid the country will hemorrhage infected migrants.”

He pointed out that the situation is quite the opposite as Brazil’s and Colombia’s COVID-19 exponential growth represents a threat to Venezuela.

“Venezuela has to watch its western border because more patients will arrive every day from Colombia fleeing from COVID-19, xenophobia and hunger,” he stressed.

Rodríguez emphasized that Venezuela registers the lowest case fatality rate (CFR) in South America according to the official figures released on the web page “Our World in Data:

He pointed out that Guaido failed to mention the money will be paid after a selection process from data registered on a Facebook page.

“He said that he was going to pay $100 to all doctors and nurses. Where does this money come from? From his pocket? No! (It comes) from the hundreds of millions he stole from a Citgo account,” Rodríguez explained.

Rodríguez also denounced the opposition lawmakers’ agreement to pay themselves USD 5,000 a month.

Communications vice-president highlighted the Venezuelan Government’s commitment to preserving the life of the people in the face of the pandemic hitting 2,810,649 people worldwide and that different governments have underestimated by giving precedence to economic interests over the health of their citizens.