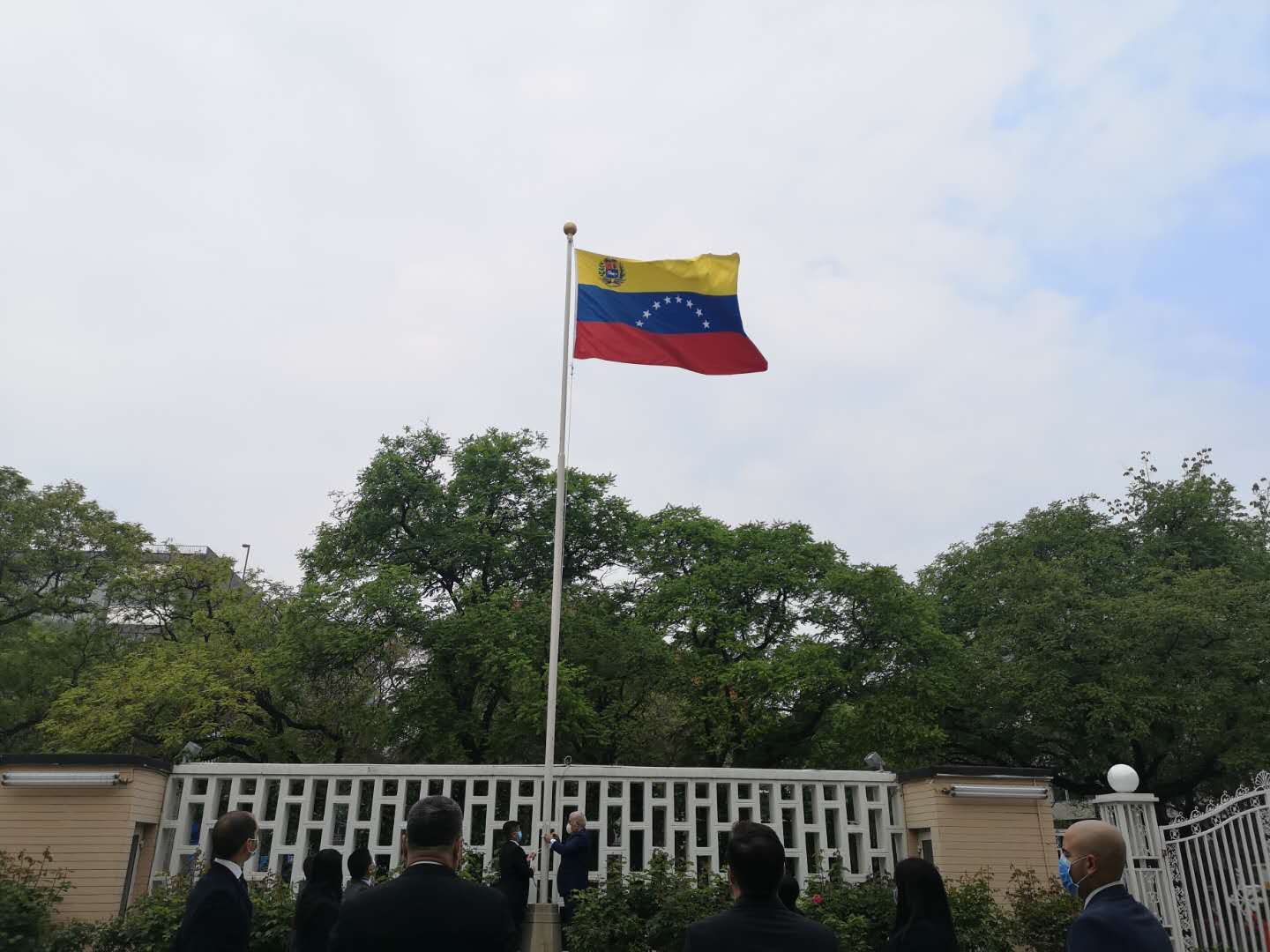 This April 19, the Embassy of the Bolivarian Republic of Venezuela to the People’s Republic of China held a commemorative event to celebrate the 210th anniversary of the independence proclamation of Venezuela.

Venezuelan diplomats accredited to Beijing and members of the Venezuelan Defense Attaché in China staged a protocol act to change the national flag located in the front courtyard of the Embassy headquarters in Beijing.

This ceremony, of deep Bolivarian feeling, recalled that 210 years ago, Venezuela took the first step towards independence, by ignoring the authority of the Spanish empire in its lands.

Likewise, with this act it was highlighted that the pro-independence feat is still in force in the Venezuelan people who have been the victim of the interventionist plans of the United States administration, through the imposition of unilateral coercive measures.

His Excellency Ambassador Wang Zhen, who represented China in Venezuelan territory from 2000 to 2003, in his message highlighted the joint struggle in the current circumstances against the new Coronavirus.

“At this time, the peoples of Venezuela and China are together with the peoples of the world in the battle against the new Coronavirus, Covid-19, the common enemy of all humanity. Cooperation and solidarity are the only way to achieve final victory. China always strongly supports the just fight of the Venezuelan people in defense of their independence, sovereignty, the well-being of the people and the right to follow the country’s development path. China takes an active part in the exclamation of all international humanity to demand the immediate suspension of all unilateral, illegal and inhumane sanctions”, he said in the audiovisual material.

On the other hand, the Vice-president of the China-Latin America and Caribbean Friendship Association, Zhang Tuo, also raised his voice and support for Venezuelan sovereignty. “I would like to express my solidarity to the Venezuelan people and the Venezuelan Government in their fight to safeguard independence and sovereignty”. Zhang was the Chinese Ambassador to Venezuela from 2007 to 2009.

The Major of the Bolivarian Army, Jhonny Uzcátegui, was one of the people in charge of raising the new national flag and affirmed that it was a propitious moment to reaffirm his commitment to the current battles to preserve Venezuelan sovereignty and self-determination:

“The soldiers in the People’s Republic of China want to send a support and solidarity message to all our people and to our revolutionary government, headed by our constitutional president Nicolás Maduro Moros, Commander-in-Chief of our Bolivarian National Armed Force. Today the world remembers that Venezuelans wanted to be, were and will continue to be irrevocably free, independent and sovereign. That is why we continue saying: Long live Venezuela! Long live Chávez! Always loyal, never traitors!”