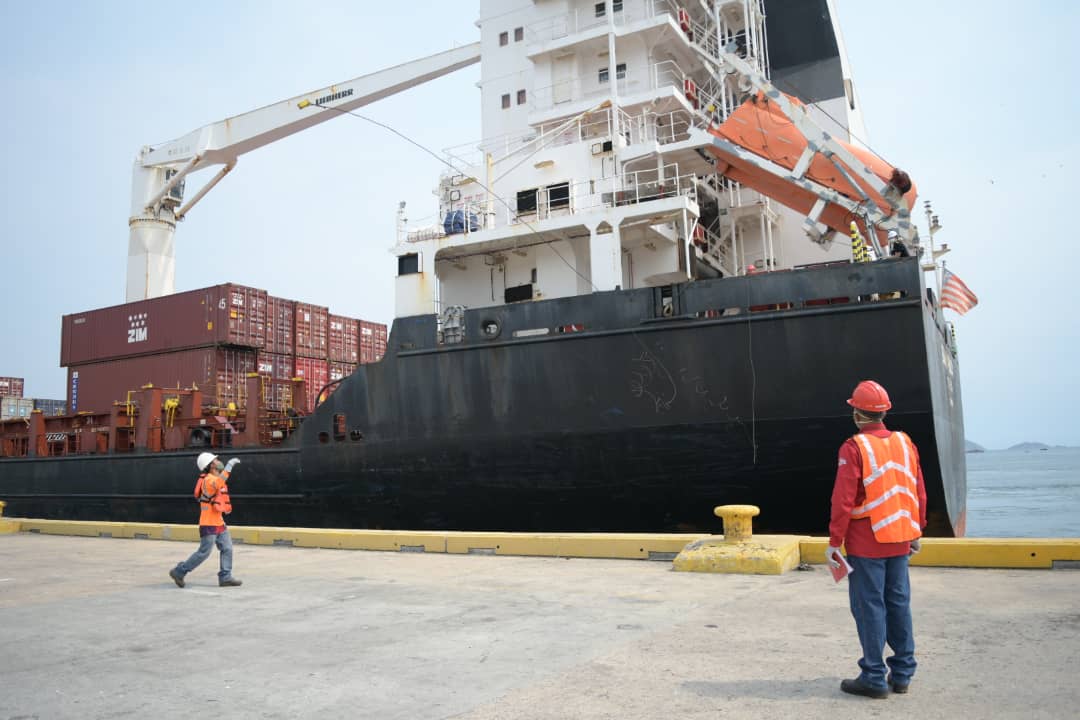 Kueka: Sacred Stone of Pemon Indigenous Returns to Venezuela after 22 Years in Germany

On Thursday, April 16, and thanks to efforts made by the Bolivarian Government and indigenous people, the Kueka Stone has finally returned to Venezuela, arriving at the dock of Guanta, Anzoategui state, from where it will be moved to its original land in Bolivar state.

According to the sacred symbology of the Pemon indigenous people, who live in the lands of the Canaima National Park, in the south of Venezuela, the 30-ton piece of red jasper stone, better known as “Grandmother Kueka” or “Kueka Stone,” represents a guarantee of nature’s balance and harmony.

The Kueka Stone was illegally removed from the vast savannah lands of Gran Sabana by the government of former President Rafael Caldera in 1998, in a process that violated the regulations on the Canaima National Park as an Area Under Special Administration Regime, to be exhibited in Berlin’s Tiergarten Park, in Germany, as a part of an exposition project mounted by German sculptor  Wolfgang von Schwarzenfeld.

After proceedings were undertaken in 2000, the Venezuelan Government took on the repatriation of “Grandmother Kueka” as a historical debt with Venezuelan indigenous people and communities, and the consistent fight of the Pemons, and on January 20, a repatriation process started to bring the stone back from Germany to its home, located in the Pemon community of Santa Cruz de Mapauri.

This repatriation process was sped up in 2010, when the Venezuelan Ministry of Foreign Affairs focused on proceeding further with the request made by the Pemon people.

“The repatriation of Grandmother Kueka, 22 years later, is the result of a friendly agreement, the determination of the Pemon people and the efforts of the Bolivarian Government headed by President Nicolás Maduro,” stressed the Venezuelan foreign affairs minister Jorge Arreaza in January 2020.

The repatriation process of the Kueka Stone formally started in May 2018 with a healing ritual performed by representatives of the Pemon people, who traveled to Berlin, as they consider it an important part of their cultural and spiritual heritage. Furthermore, they were certain that when it returns, it will reestablish the planet’s environmental and ecological balance that was broken when Grandmother and Grandfather Kueka were separated.

“We are here to perform a healing spiritual ritual for our Grandmother because she is sick. Our grandmothers have seen her crying in their visions because it misses his motherland Venezuela,” said a Pemon young spokeswoman on that occasion.

Pemon representatives thanked the Venezuelan Government and its institutions for the efforts they have made since President Hugo Chávez was in office, and more recently President Nicolás Maduro, to return the Kueka Stone.

Minister of People’s Power for Foreign Affairs Jorge Arreaza stressed that Venezuela’s indigenous people have achieved real equality since 1999, not only in the political field, by in all aspects of Venezuelan society.

A Living Legend among the Pemon people

Grandmother Kueka is a wise elder woman who protects her people, and her legend refers to a beautiful, brave love story.

Indigenous communities Pemon and Macuxi were enemies from time immemorial, and their people were jealously separated by God Makunaima, until young Pemon Taure Pam and the most beautiful Macuxi young woman became lovers, thus disrespecting the established norms.

The irreverent lovers fled and broke the rules of God Makunaima, who prohibited the union between the two peoples, and they were turned into stone to live together forever.