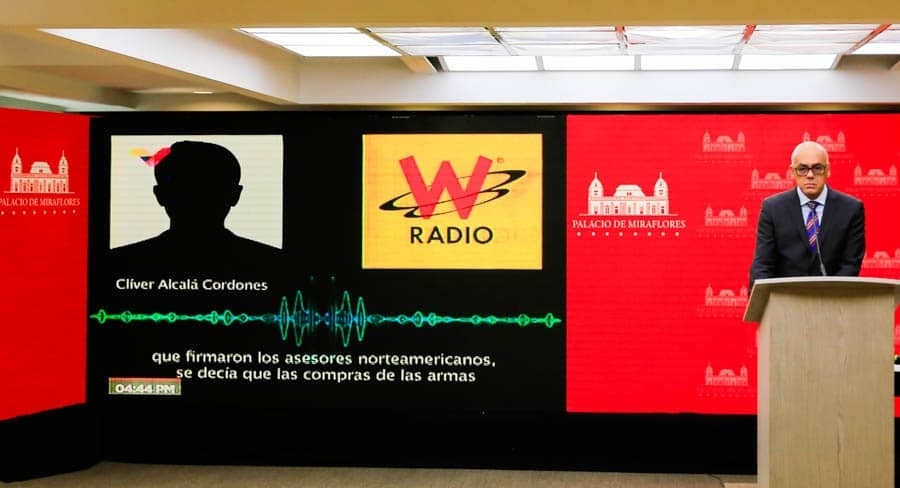 In the last four years, Venezuela has denounced the terrorist and assassination plans against President Nicolás Maduro Moros, senior officials and institutions of the country planned from Colombia, in coordination with the government of the United States of America (USA), the Sector Vice-president for Communication, Culture and Tourism, Jorge Rodríguez emphasized this Thursday.

From the “Simón Bolívar” press room at the Miraflores Palace, he reiterated what was reported this Wednesday and presented new evidence of the terrorist plan led by the former Major General, Clíver Alcalá Cordones, which involves the former president of the National Assembly (AN) in contempt, Juan Guaidó, the North American advisers, the specialist in terrorism campaigns, Juan José (JJ) Rendón, where the deserting military officer accepts, during an interview for a Colombian station named W Radio, the plan organized from Colombia, which has been denounced by the Venezuelan government, that proposes a series of targeted assassinations, including that of President Nicolás Maduro.

Alcalá Cordones was identified as the coordinator of all efforts to commit terrorist acts and assassinations against Venezuela, which would be carried out in March amid the Coronavid Virus Covid-19 pandemic that reached the country.

He detailed the various plots between the Venezuelan opposition, the Colombian and the American establishment to overthrow President Maduro, particularly since 2018.

In this regard, he recalled that on August 4 they carried out an attempted assassination that was not only intended to assassinate the Venezuelan president, but also the members of the Venezuelan Military High Command and other authorities in the country.

“The drones and explosives were bought in Colombia and the terrorists were trained in Colombia”, Rodríguez reiterated during the statement broadcast by the National Public Media System, in which he pointed out that all these plans point to the opposition leadership.

He also recalled that on April 30, 2019, an attempt was made to carry out a coup d’état and the vast majority of those who perpetrated this failed action are protected in Colombia, “now in training camps to continue their criminal action”, he said.

In mid-June of last year, the Venezuelan government also revealed elements that led to destabilizing plans, a complaint that caused an advance declaration by the Colombian Executive.

To end, the Sector Vice-president of Communication, Culture and Tourism, Jorge Rodríguez, stressed that in August 2019 the plans of the deserter of the Bolivarian National Armed Forces (FANB), Clíver Alcalá Cordones, and the fugitive of justice, Luisa Ortega Díaz, to place explosives in the Palace of Justice in Caracas, among other places, were also revealed, while in September of that same year, Maduro indicated that up to 10 assassination plans were being developed from the sister nation.