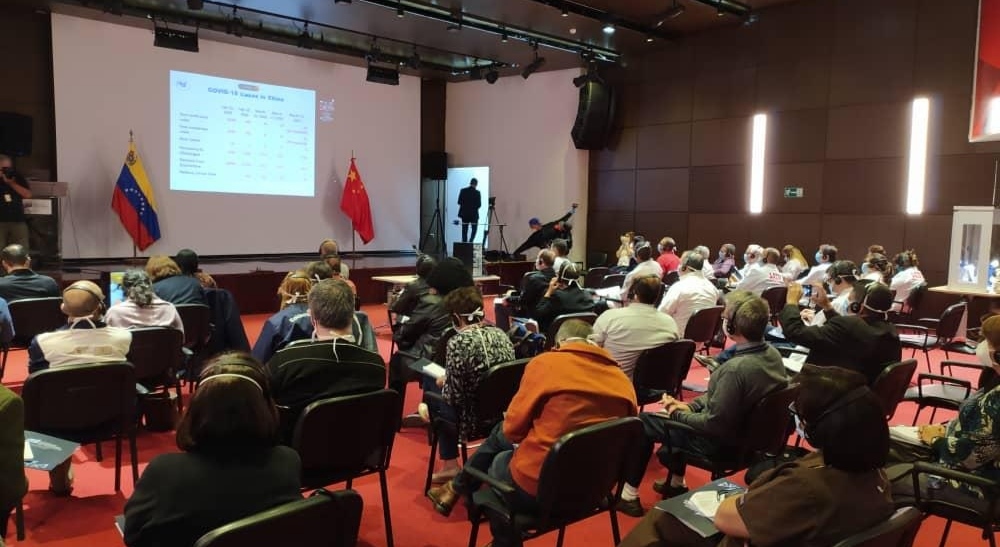 Through a videoconference, which brought together more than 27 countries, Venezuela and China promoted a connection for the exchange of medical, scientific, technological, security and social, advances that have been developing, to guarantee the greatest of successes for the combat of the Covid-19, which keeps the entire world in crisis.

The Minister Simón Zerpa, the Minister of Health Carlos Alvarado, the Minister of Science and Technology Gabriela Jiménez, and more than 50 Venezuelan scientists, researchers, representatives, gathered in the Hugo Chávez Room of the People’s Power Ministry for Economy and Finance. of the Ministry of Defense, representatives of the Cuban Delegation of Doctors and technical specialists, as well as members of the Embassy of the People’s Republic of China, who participated in the technological initiative, with the aim of collectivizing the protocols that have demonstrated effectiveness against the pandemic.

The agenda was organized with the presentations from China, starting with the expert of the National Health Commission, Dr. Gui Quiang Wang, who presented the latest version of the protocol for the Treatment of Covid-19, which is being systematized and evaluated by the Department of infectious diseases.

For treatment, he stated that the most important thing is to identify the phase the patient is, in order to determine if his condition corresponds to a patient at a basic, medium, severe or critical level.

The initial protocol involves determining the source of the infection, then isolating the patient, carrying out the examinations and subsequent monitoring, which consists of checking blood values, taking the temperature and applying the established treatments according to the patient’s symptoms, health history and age.

Isolation is the fundamental measure to control the spread of the virus, guaranteeing adequate care for the patient, his / her direct contact group (usually the family), and disabling the possibility of future new infections.

Antivirals, Chloroquine, Interferon, are presented as effective treatments against the virus, as well as the supply of electrolytes, oxygen, respiratory support, immunotherapy and plasma transfusion in critical cases.

On the deployment of security, immigration control is essential to support the isolation measure, joint work with airports contributes to marking the path of infected cases and their possible range of action.

The work in airports is of utmost importance, because it has been determined that the majority of cases, both in China and 100% to date in Venezuela, are imported, with the epicenter of European countries, so the disinfection protocol on planes goes from the airport to cargo areas, through the establishment of quarantine and medical care areas.

The activity closed with an exchange of questions and answers, which clarified the doubts that still exist among countries that have not finished applying the effective protocol of China.

The union of the world in the effort to maximize preventive measures will be the key in the steps towards victory against the deadly enemy that Coranavirus has become, with the most vulnerable population being older adults, as evidenced by the statistics.

While hundreds of people continue to give their all for everything in the world to attend to the cases that have already been generated, the response of humanity must be with greater force, solidarity, staying home and not exposing oneself is still the cure for this new evil, which will soon find its greatest adversary, consciousness and love among human beings.