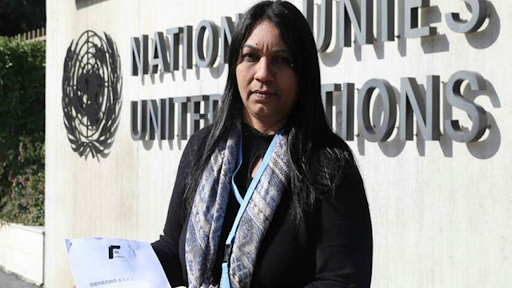 The Latin American Foundation of Human Rights and Social Development (Fundalatin) urged UN High Commissioner for Human Rights Michelle Bachelet to demand the US government to put an end to the economic and financial blockade illegally imposed on Venezuela in order to enable the purchase of medicines and medical supplies to prevent and contain COVID-19.

In a statement, Fundalatin President María Eugenia Russián complained that “amif this global pandemic, the U.S. government continues its financial persecution against Venezuela and prevents pharmaceutical companies to sell raw material and medicine to the country out of fear to be ‘sanctioned’ by the U.S. Department of Treasury. It is a flagrant violation to the rights to health and life of the entire population.”

Fundalatin also requested Bachelet to call on the U.S. government “to authorize Venezuela’s Conviasa airline to carried out necessary operations in its territory for the humanitarian repatriation of Venezuelan citizens in the United States who have been affected by COVID-19 and need our help.”

The human rights organization recalled that “in this moment, there are Venezuelans waiting for their repatriation, but the U.S. government is preventing Conviasa to enter its territory, thus affecting those people who want to return to their country amid this pandemic.”

On March 10, in her oral update on Venezuela during the 43rd session of the Human Rights Council, UN High Commissioner for Human Rights expressed her concerns about the imposition of a blockade against Conviasa that prevents its operation and ” reduce the Government’s resources for social spending.”

Likewise, Fundalatin stressed that Executive Orders 13.808, 13.850, 13.884, among others, blocked PDVSA and prevented it from accessing the financial system. Later in August 2019, the U.S. government froze Venezuela’s assets in the United States; this has posed serious extraterritorial consequences for foreign companies and individuals that provide goods and services to Venezuela.

Furthermore, in March 2020, the U.S. government extended its decree declaring Venezuela “an unusual and extraordinary threat” to its security, and it has prevented the sale of Venezuelan oil, which is the main source of incomes of the South American country, thus threatening to leave the country without enough resources to face the effects of this pandemic amid a significant fall of oil prices in the world.

These unilateral, coercive measures against Venezuela violate the Venezuelan population’s human rights because they block the import of medicines, food and vital supplies for survival and directly affect the most vulnerable sectors.

Finally, Fundalatin stated that “we are facing an emergency in the world and we should not give prevalence to the interests of a government over the health of the people. The right to life always has to prevail.”