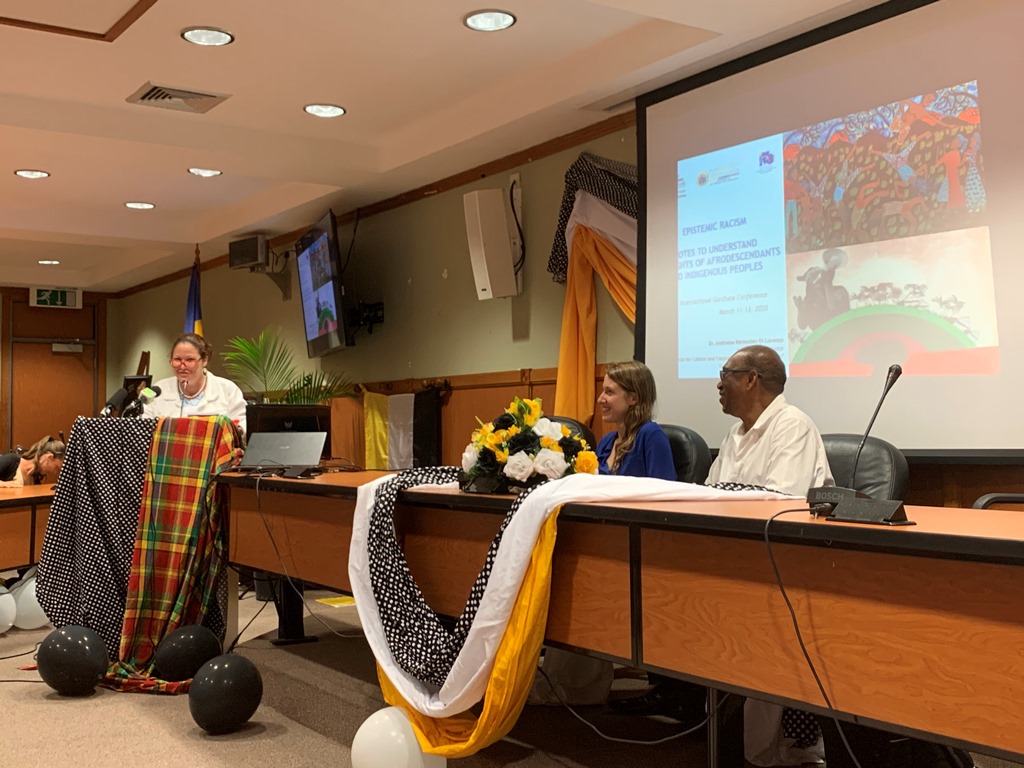 The diplomatic corps of the Bolivarian Republic of Venezuela in Saint Vincent and the Grenadines attended the VII Garifuna International Conference called Caribbean Indians, Rethinking a Management strategy to revive Garifuna Heritage and Culture through Education, held in the Hall of Conferences of the National Insurance Service of the island.

The head of the Venezuelan diplomatic mission, Francisco Pérez Santana, was present at this activity; the Ambassador of the Republic of Cuba, José Leyva Ventura; the Minister of Education, St. Clair Jimmy Prince; the Minister of Tourism, Sports and Culture, Cecil McKie; in addition to a group of academics, teachers and researchers from different parts of the world.

In the framework of the session The role of Afro-descendants in Indigenous culture; the Academic Coordinator of the Institute for Culture and Cooperation “Hugo Chávez Frías” of the Embassy, ​​Andreína Bermúdez Di Lorenzo presented her paper The Epistemic Racism. Notes to understand the struggles of Afro-descendant and indigenous peoples.

Bermúdez explained to those present the importance of studying Latin American and Caribbean Afro-descendants and indigenous people in defining the cultural identities of peoples: “There have been numerous investigative efforts made to confront what the West has imposed as essential epistemic and philosophical thought in our countries. Thought that is part of the colonial heritage existing in contemporary Latin American societies, visible in the forms of social exclusion against indigenous and Afro-descendants peoples”. Then she assured that his study aims to “confront the historical racism imposed for centuries on our worldview”.

The IVCC coordinator showed a video where Commander Chávez claims to be proud of his African roots and the need for us all to know, appreciate and highlight our origins.

The guests and invited speakers from Belize, Honduras and Saint Vincent and the Grenadines thanked the Venezuelan Embassy for holding the conference Epistemic Racism. Notes to understand the struggles of Afro-descendant and indigenous peoples that allows them to recognize Venezuelan indigenous data and identity values ​​at the same time that it confronts epistemic racism in world academic spaces.

The Embassy of the Bolivarian Republic of Venezuela continues to contribute academically and culturally to the battle of ideas to consolidate ties of friendship and solidarity between peoples, exercising the Diplomacy of Peace.