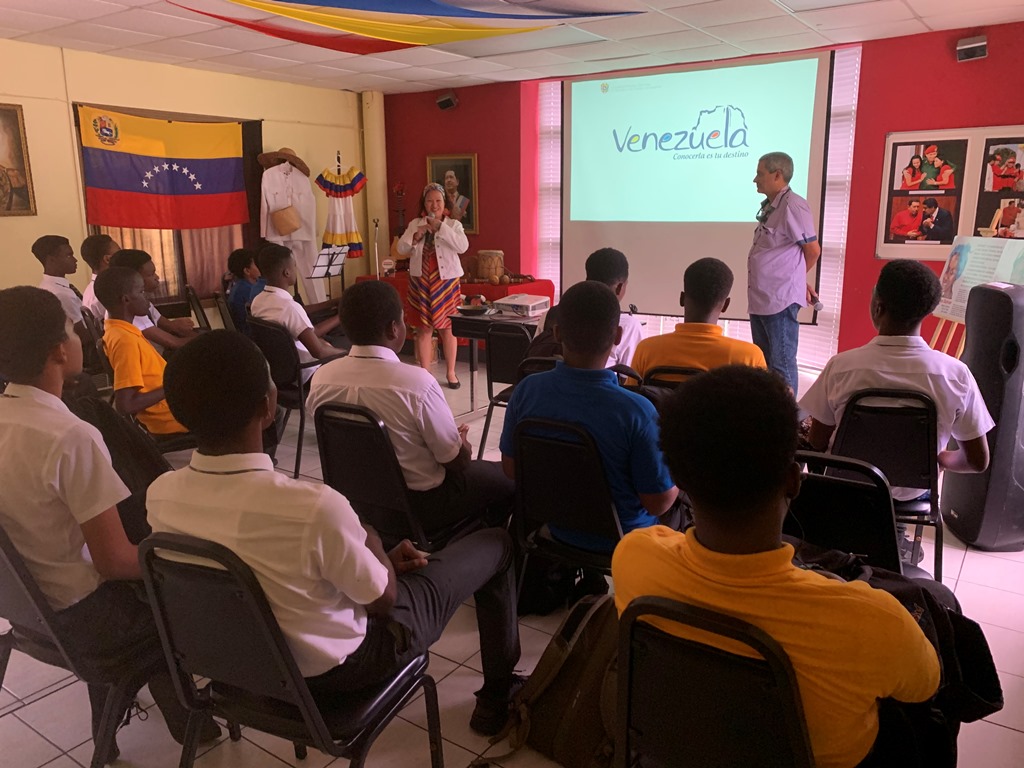 The Embassy of the Bolivarian Republic of Venezuela in Saint Vincent and the Grenadines through the Venezuelan Institute for Culture and Cooperation Hugo Chávez Frías received a group of students from the “Grammar School” High School with the aim of promoting culture and history of the Venezuelan homeland.

Francisco Pérez Santana, head of the Venezuelan mission in Saint Vincent and the Grenadines, welcomed the high school students, and assured “you are in Venezuela at this important moment and I am very proud that you in your Spanish class have decided to come here to learn a little more about our country, Venezuela; our culture, our flag, our shield, our traditions”.

For her part, the Coordinator of the Venezuelan Institute for Culture and Cooperation Hugo Chávez Frías, Andreína Bermúdez, spoke with the students of the Grammar School about the history of Venezuela, the African and indigenous roots that are part of the Venezuelan, she explained the customs and traditions of indigenous peoples from the stilt house, the hut; means of transportation such as the canoe; foods like casabe, among others. In turn, he showed students, through photographs, the Venezuelan culinary culture such as: arepas, empanadas, hallacas, ham bread, creole pavilion, tizana, andean pinch, among others.

Bermúdez spoke about the arrival of the Bolivarian Revolution with the presidency of the Commander, Hugo Chávez Frías; highlighting the multiple achievements in the political, economic, international, as well as the different missions created in revolution “when Chávez arrived, everything in my country began to change; In educational matters, we now have a large number of public universities for the entire population. If someone wants to study medicine, international studies, political studies, if they want to be engineers, military, they can do it, completely free of charge”, and assured that President Nicolás Maduro has given continuity to all these social conquests.

These visits are made with the aim of consolidating the bonds of friendship between Saint Vincent and the Grenadines and the Bolivarian Republic of Venezuela through the promotion and knowledge of culture.