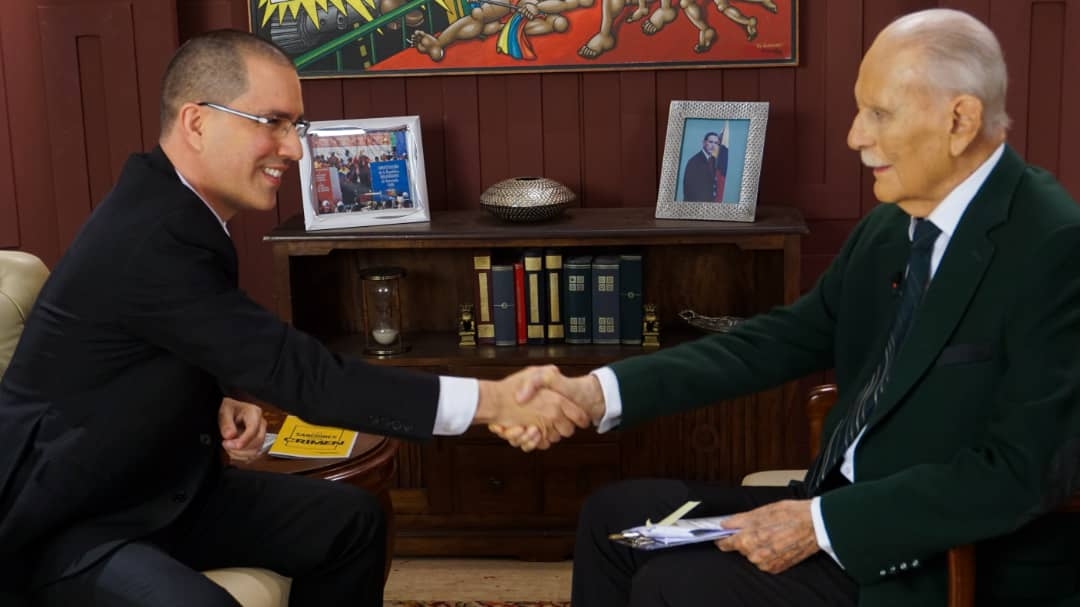 This Sunday, in an interview offered on the José Vicente Hoy program, led by the journalist José Vicente Rangel, the People’s Power Minister for Foreign Relations, Jorge Arreaza, assured that in the face of the multiform aggression of the United States government and its countless violations of Human rights to Venezuelan society, the Bolivarian Republic of Venezuela will continue to strengthen its foreign policy based on respect for international law.

“International law is the shield that peoples have for equality to reign, so we can advance in fair conditions of human development. This country, the United States, blatantly violates international law, finances and promotes conspiracies, applies unilateral coercive measures against 36 States of the world”, he highlighted.

In this regard, he recalled that on February 13, the referral of a complaint prepared by the Bolivarian Government on the effects of such measures that constitute crimes against humanity was delivered to the Prosecutor of the International Criminal Court.

“We have taken them to the International Criminal Court, which is a multilateral body, so that they can be investigated, neutralized and the responsibility for these events be determined, but we do so in accordance with public international law, that is our responsibility”.

The Venezuelan diplomat assured that although the victory is not yet irreversible, diplomacy is the only path that must be followed.

He specified that the key is to accompany the national development policy with a foreign policy that creates the conditions for the Venezuelan people to guarantee their resources and their own present.

“We are fighting alongside the people, there will be no rest until we can stabilize the country, its economy, its political and social life and we have all the resources to fulfill the needs of the Venezuelan people”.

On the other hand, the People’s Power Minister for Foreign Relations made a call for reflection, given the complex public health situation that 124 countries in the world are going through with the appearance of the Covid-19 Coronavirus, declared a pandemic by the World Health Organization (WHO), in recent days.

“Hopefully the United States government will take into account this complicated public health situation, reflect and stop its aggressions against Venezuela, Cuba, Iran, Korea, Zimbabwe, and the rest of the nations that they economically attack, since it makes it more difficult to attend to problems like this”.

Finally, the Venezuelan Foreign Minister recalled that elections will be held this year and the new National Assembly will be elected. “The people will give political direction to the country”.