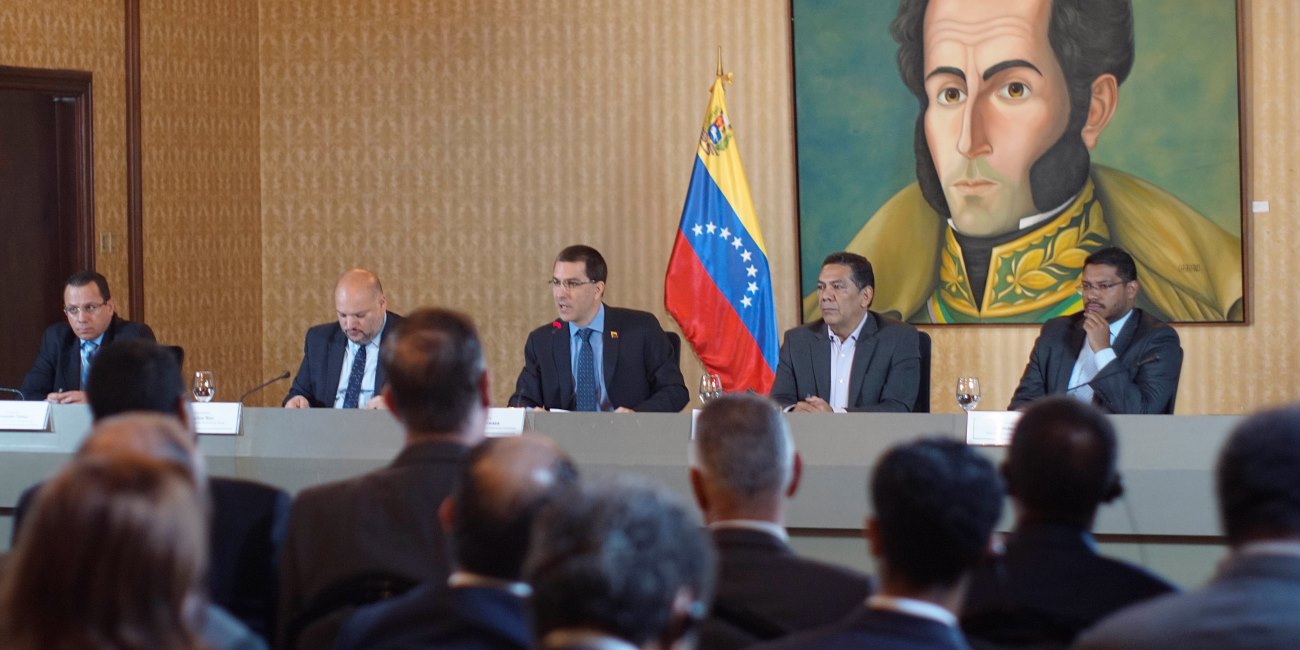 At a meeting with the diplomatic corps accredited to the Bolivarian Republic of Venezuela, Minister of People’s Power for Foreign Affairs Jorge Arreaza warned the international community on Monday about a new offensive led by the US government against the South American country.

The Venezuelan foreign affairs minister contextualized and summarized the hostile policy of the White House and warned about the naval blockade they have started to ponder against Venezuela.

“A naval blockade is acknowledged by the United Nations as one of the forms of use of force. However, it has been proposed in the Oval Office, the Department of Defense, and the Department of State; it has been proposed during visits of Latin American presidents to the United States” he said referring to the meetings held by president Donald Trump with his Colombian and Brazilian counterparts Iván Duque and Jari Bolsonaro in recent days.

This offensive, explained Arreaza, is part of the phase of aggressions against Venezuela that started in 2014, but it has become much stronger since 2017 thanks to disruptions to the Venezuelan economy, the imposition of unilateral coercive measures, threats of use of force, and even attacks like the one carried out over the weekend against a warehouse of the National Electoral Council (CNE) near Caracas.

“This is all part of the still-in-effect Monroe Doctrine, an anachronic, old and antiquated doctrine,” he added and also warned about the insistence of the US government and the US-aligned governments in the continent  to activate the Inter-American Treaty of Reciprocal Assistance, known by its Spanish acronym TIAR.

The Venezuelan foreign affairs minister complained that Venezuela is part of the agenda at meetings between Donald Trump, Duque and Bolsonaro. In the case of Colombia, Arreaza believes that Duque’s government is trying to divert attention from the complex situation of Colombia, where illegal cocaine production and the killing of social leaders and human rights activists continue to reach record highs.

“Why is Venezuela part of their agendas? Why is Venezuela permanently mentioned in their military meetings?” questioned Arreaza, who also referred to the meetings held by the Commander of the US Southern Command Craig Faller and presidents Duque and Bolsonaro.

Addressing other issues, Arreaza stressed that Venezuela will hold legislative elections this year according to what the Constitution stipulates.

The Venezuelan foreign affairs minister reiterated that, with this policy, the US government and its allies flagrantly violate the Charter of the United Nations and the most elemental principles of international law.

“They do it openly. Media outlets do it,” he stressed.

Arreaza highlighted the adherence of the Bolivarian Republic of Venezuela to the UN Charter and international laws.

The Venezuelan foreign affairs minister requested the ambassadors, chargé d’affaires and the rest of the members of the diplomatic corps accredited to Venezuela to convey his remarks to their respective countries, hoping that the international community could contribute to neutralize these transgressions.