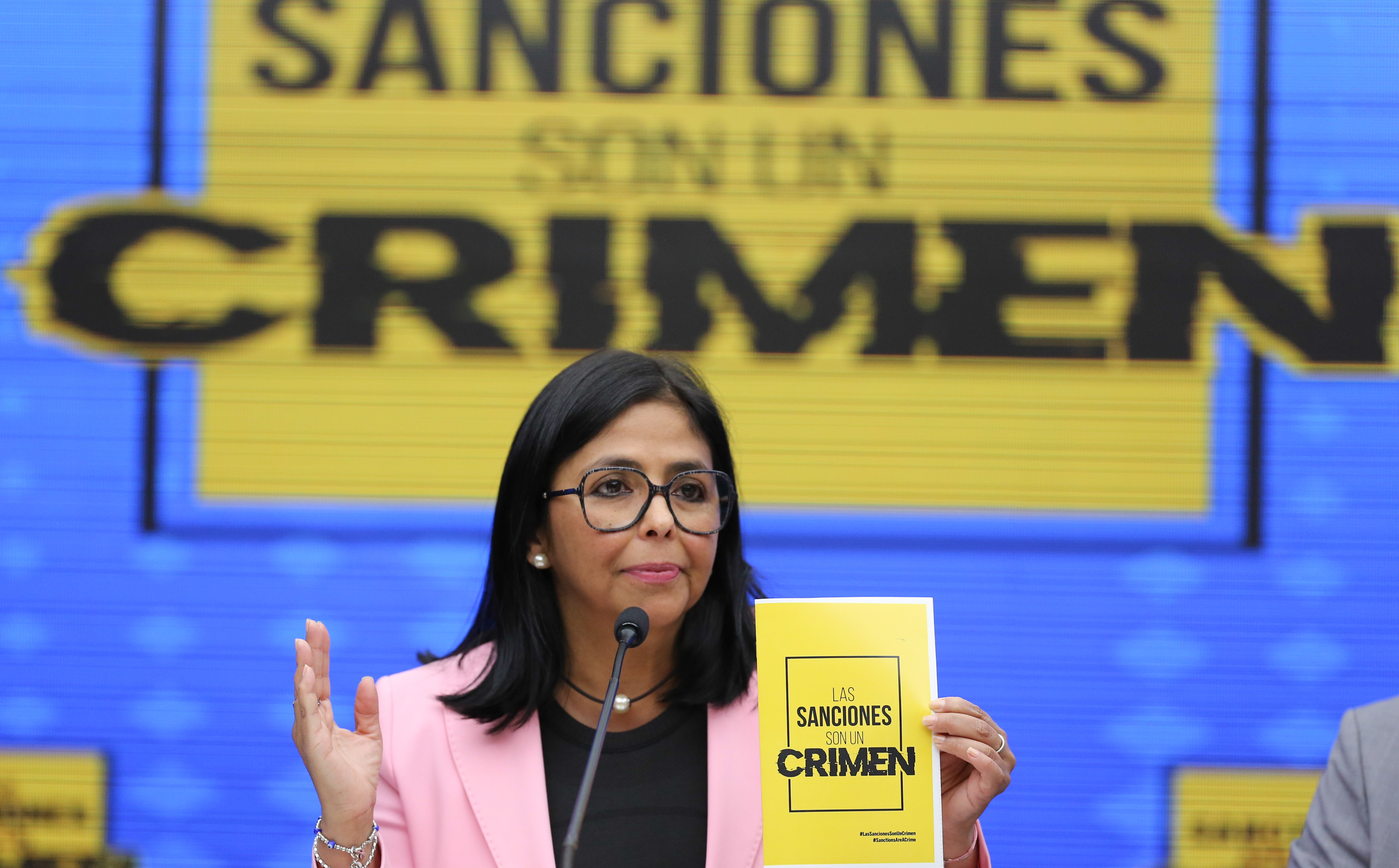 Good afternoon, we wanted to make this statement to the media, to keep the population and the international community informed, on the development of what has been the referral of the situation in Venezuela to the International Criminal Court, derived from the serious violations, crimes against humanity committed by the United States government against the Venezuelan people, through the imposition of unilateral coercive measures.

As you well know on February 13, our Foreign Minister Jorge Arreaza, appeared before the International Criminal Court in The Hague, and handed over to the prosecutor the situation in Venezuela, referring precisely to a very special case, where it is demonstrated that unilateral coercive measures, which today constitute a fundamental element of the foreign policy of the United States of America, constitute a crime against humanity. We have presented an extensive report, where we document all the derived actions, direct confessions of the United States government, where we report on how it has been affecting the Venezuelan population in general.

Why is it a crime against humanity? Precisely because it is directed against the Venezuelan civilian population, without any distinction, because it is being systematically and deliberately exercised as a policy of the United States government. I want to cite just three statements by high representatives of the US government, where the intention is clearly evidenced, with an illegal political objective that is the change of regime in Venezuela, which is the change of the constitutional government in Venezuela. In the year 2017, 8 August, the President of the United States, Donald Trump said about Venezuela: “People are suffering and dying, we have many options in Venezuela (the threat always) including a possible military option if necessary”, you know that it is it has been a statement that has been spread precisely because of extremism in his expressions, a direct threat against the Venezuelan people, which constitute a violation of the Charter of the United Nations, which prohibits the use of force against civilian populations.

Sanctions kill the population, the unilateral coercive measures constitute a direct tool of aggression against the people, this is a statement that former Ambassador William Brownfield said  in October 2018 that we cannot ignore: “We must treat this as agony, a tragedy that will continue until it comes to an end and if we can do something to speed it up, we must do it, but understanding that this is going to have an impact on millions of people, who are already having difficulties finding food and medicine, we cannot do this, that is, we cannot pretend to change the government of President Nicolás Maduro, who was elected by the Venezuelan people in direct elections, we cannot do this and pretend that it will not have an impact, we have to make a tough decision, the desired end justifies this severe punishment”, this is one of the most perfect confessions that has also been recorded before the International Criminal Court, this and many more more will be consigned.

In January 2018, the State Department in a statement said: “The pressure campaign against Venezuela is working, the financial sanctions that we have imposed have forced the government to start falling into default, both in sovereign debt and in the debt of Pdvsa, their oil company, hear it well, they have been forced into default, as stated at the time, international rating agencies and what we are seeing is a total economic collapse in Venezuela, so our policy works, our strategy works and we will maintain it” Department of State of the United States of America. There is a direct causality between the intention, which is the change of government in Venezuela and the measures they are using to cause suffering to the entire Venezuelan civilian population.

There are the confessions, where they directly assume, and Secretary of State Pompeo said so, that these illicit sanctions were coordinated directly by him and the President of the United States, Donald Trump, there is the causality, they confessed it, they declare it, they ratify it, because the foreign policy of the United States is outside the law, it is an illicit policy, contrary to international law, contrary to national legal orders, violates all international and national legality, aims to violate our national jurisdiction. So this crime, it must be said, has been taking shape, since 2014, let’s remember, December 2014, when the law that set up the foundation for the illegal decree of Barack Hussein Obama, which considered Venezuela a threat to the national security of the United States and its international policy, was created.

But from December 2014 to 2020 there has been a timeline that is also important, from the legal point of view, and it has to do with how they have been suffocating the national oil industry, they have directly attacked PDVSA, they have subtracted financial, logistical, administrative operations to our national industry, directly affecting the income of Venezuela, as you can see here and it is also subscribed in this referral that we made to the Court, here it is in accordance with article 14 of the Rome statute, there it can be seen very clearly how the national income has fall in more than 90.5 percent, they have expressly declared it, this is the objective of creating the economic collapse in Venezuela, causing suffering for the entire population.

The impact on the importation of products for the CLAPs, directly violating the right to life of the Venezuelan people. Obstacles for importing products, to agricultural activity, Venezuelan food security threatened by this type of measures. The report to hinder the production and commercialization of Venezuelan oil, we have already seen what the fall in national income and all infrastructure has meant, PDVSA logistics has been the victim of this unilateral coercive measure. The impact on public services such as drinking water, national electrical system, transportation. The report on the impact the measures have on public finances, on the state’s income, the costs they mean. Report on Venezuelan migration, very important, Mr. Foreign Minister, because precisely the Venezuelan migration of which the opposition has made so much scandal in a macabre plan, caused by them together with the United States government and satellite allies, just means a migration promoted by these unilateral coercive measures, an economic and forced migration which, according to independent experts from the United Nations, is also a crime against humanity. The topic of unilateral coercive measures, as we pointed out in our speech to the United Nations General Assembly last year, already covers 36 countries, 36 countries have been and are victims of this interventionist policy, interventionist and that undoubtedly constitutes an aggression in an unconventional way.

It is configured in this case and we are demonstrating this before the International Criminal Court. In this case, a crime against humanity against the Venezuelan people is configured.

It is important to inform the Nation and the international community that the International Criminal Court on February 19, has already opened a preliminary examination of this complaint, a serious complaint that Venezuela has filed in The Hague, there is already a preliminary examination, it is the first stage that is already being presented and will lead to an investigation. There we demonstrated with number, the Vice-president of Planning has been diligent in everything that has to do with the compilation of effects and impact, he has demonstrated the impact that they has caused in each sector of the population, in the most vulnerable sectors of our population.

I want to thank the Ombudsman, because in this national campaign, today we are presenting the country with a national campaign, where the concept is this: sanctions are a crime, this is a campaign that must mobilize the whole Venezuelan people, not only in our country but must mobilize international solidarity, and I will inform in minutes what are the next steps that we are going to take in this direction, the first thing: the Foreign Minister addresses the International Criminal Court to present the special reports on the impact of unilateral coercive measures on the different sectors of the economic, social and cultural life of Venezuela. The second: the President dictated it and it will be published tomorrow in the Official Gazette, a decree that creates the unique information record, on the negative impact of unilateral coercive measures, which must be taken by each organ and body, state entities, called to register this impact, this registry will be in charge of the Executive Vice-presidency of the Republic and there, the negative impact must be recorded quarterly and then, in order to have a single and centralized registry, which allows the direct communication that the Chancellor must establish with The International Criminal Court, this report must present the direct and indirect damages caused by this unilateral coercive measures. I also said that I thank the Ombudsman, because he has made available the 33 headquarters of the Ombudsman at the national level, for all Venezuelans who have a case, listen carefully, those of us who have a case or have been victims of these unilateral coercive measures, can take them to one of these 33 headquarters of the Ombudsman, so that we can organize them in the proper articulation of the file that must be submitted to the International Criminal Court.

So the whole country must mobilize, because the victim, the victimization process that is taking place through these deliberate, systematic actions, which is a policy of the United States government, affects the entire Venezuelan population, without any distinction. This is not a partisan campaign, this is a campaign of all Venezuela, all Venezuela united must mobilize, all Venezuela united must denounce and let this voice reaches the international instances of international justice, to determine who are the criminals who attack the people of Venezuela and attack the Charter of the United Nations, preventing and violating the existing prohibition of the use of force against a sovereign country.

This is how this campaign of great mobilization and national union, of great national conscience, begins today, so that we can all demonstrate how we have been victims of these unilateral coercive measures, Mr. Foreign Minister you and the Foreign Ministry have the responsibility to take this campaign beyond our borders, to generate solidarity.

So all our homeland united, we come to the defense of Venezuela and continue to advance, we will be periodically reporting on progress, this case is already under preliminary examination and we are heading at this moment to the International Criminal Court to Present the reports on the negative impact that these unilateral coercive measures have had on the different sectors of the national life of our country. So Venezuela go ahead, victorious Venezuela, with our father the Liberator we will continue on the path of dignity and freedom.