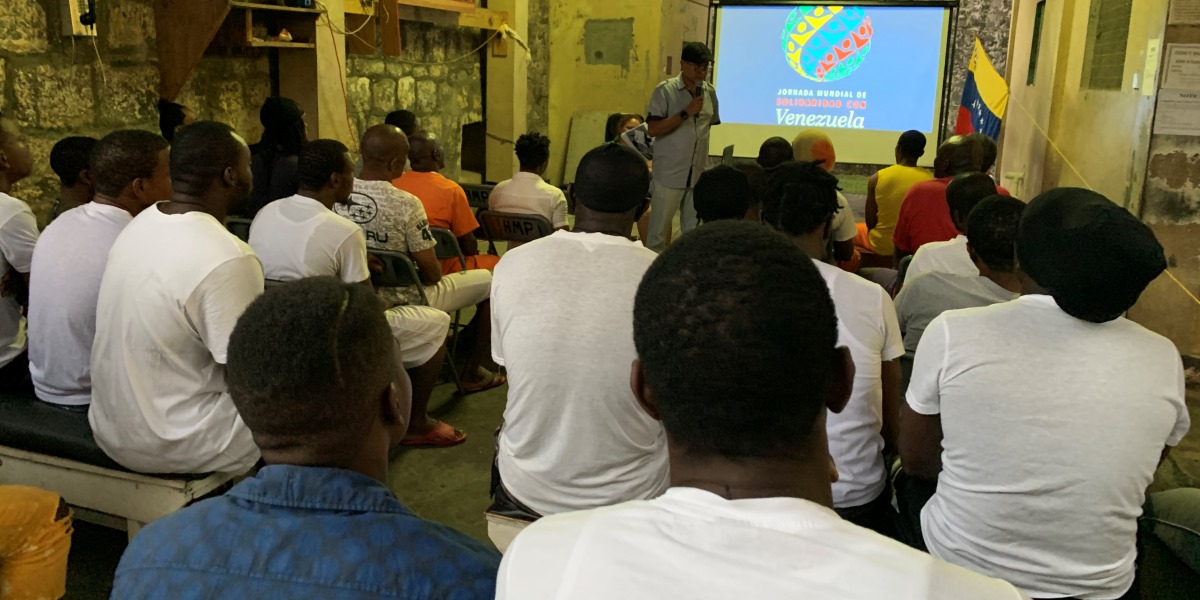 The Venezuelan Diplomatic Mission in Saint Vincent and the Grenadines, in the framework of the World Solidarity Day with Venezuela, on Thursday, February 27, developed the El Caracazo Cinema-Forum, at the facilities of the Majesty’s Prison in Kingstown, to commemorate the events of February 27, 1989, known as El Caracazo, and join this Day that seeks to vindicate the struggle of the peoples of the world against neoliberalism.

The head of the Venezuelan diplomatic mission on the Caribbean island, Francisco Pérez Santana, explained to the group of persons deprived of liberty how the so-called “representative democracy” was managed in Venezuela, led by the power groups belonging to the oligarchy of the political parties Democratic Action and Copei: “February 27, 1989 meant the beginning of the breakdown of the policies of the International Monetary Fund (IMF). The Venezuelan people rebelled against neoliberal policies. This solidarity initiative with Venezuela not only vindicates the fight against the neoliberal policies that took place in Caracas in 1989, but, a recognition to the resistance of the peoples of the world against the neoliberal model”.

During his speech, Pérez Santana presented a series of photographs known as “El Caracazo, a story made people”, which were captured by Venezuelan graphic reporters Francisco Solórzano and Tom Grillo. The diplomat recalled with this photographic exhibition that thousands of Venezuelans took to the streets that day to protest the increase in the cost of the ticket and the collapse of the standard of living and these demonstrations were met with massive repression by the forces of State security.

Andreína Bermúdez, academic coordinator of the Venezuelan Institute for Culture and Cooperation “Hugo Chávez Frías”, presented the Venezuelan historical film, directed by Román Chalbaud, El Caracazo, which is a chronicle of the events in Venezuela on February 27, 1989.

Finally, the prisoners were grateful for the sharing of such important facts about Venezuela political history.

The Embassy of the Bolivarian Republic of Venezuela in Saint Vincent and the Grenadines will keep developing this type of social and cultural work with those deprived of liberty, as agreed at a meeting between the head of the Venezuelan diplomatic mission and the Superintendent of Prisons from the Caribbean country, Charles Brenton.