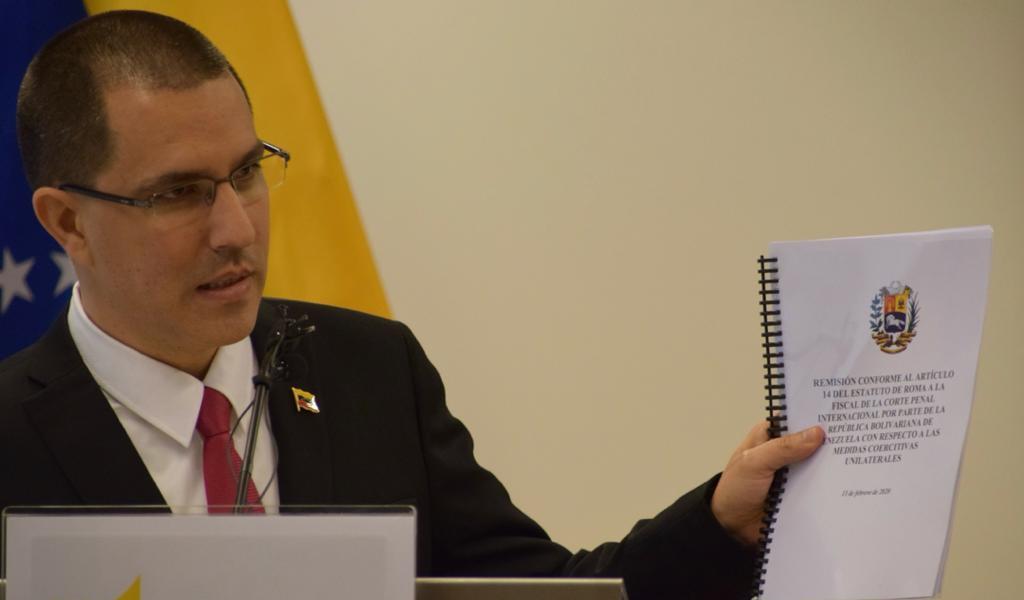 The Foreign Minister of the Bolivarian Republic of Venezuela, Jorge Arreaza, on Thursday issued a letter signed by President Nicolás Maduro before the International Criminal Court (ICC), which formally requests the initiation of an investigation into crimes against humanity that derive from the illegal unilateral coercive measures imposed by the United States government against the people and the Venezuelan State as a whole.

“We have the conviction that the consequences of these unilateral coercive measures constitute crimes against humanity; in this case, against the civilian population of Venezuela”, said the Venezuelan diplomat in a press conference from The Hague, the Netherlands, after referring the case to the international court.

These measures, he reiterated, symbolize a new modality of the use of force in a flagrant violation of the Charter of the United Nations and the most elementary principles of international law.

Under these arguments, the Venezuelan Foreign Minister demanded relevance and opportunity in dealing with this referral to the International Criminal Court.

“The longer the action takes, the more suffering is generated, the more people are affected. It is an urgent collective work”, which could generate jurisprudence, he added after exposing the severe consequences of these measures on the Venezuelan people in all areas.

The Venezuelan Foreign Minister reiterated that the unilateral coercive measures imposed by the United States on Venezuela are aimed at creating the conditions that lead to a change of government by force in the Latin American country.

Venezuela’s allegations have been presented in accordance with article 14 of the statute of the international tribunal, which states: “Any State Party may refer to the Prosecutor a situation in which it seems that one or more crimes under the Court’s concern have been committed and request the Prosecutor to investigate the situation in order to determine whether one or more specific persons should be charged for such crimes”.

The illegal decisions, taken under the euphemism of “sanctions”, have caused a huge calamity for the civilian population of Venezuela. They have also undermined a range of human rights, including the right to life, food, medical care and education, causing, in turn, an atypical migration of Venezuelans abroad.

The UN General Assembly has declared that “unilateral measures and coercive legislation are contrary to international law, international humanitarian law, the Charter of the United Nations and the norms and principles governing peaceful relations between States”.

And the Human Rights Council, at its 42nd session in September 2019, adopted a resolution recognizing that “unilateral coercive measures are further exacerbating the effects of the economic crisis and, therefore, the humanitarian situation”.

The Bolivarian Republic of Venezuela is a State Party to the Rome Statute, which signed on October 14, 1998 and ratified on June 7, 2000. Consequently, the Statute is in force with respect to Venezuela since the treaty entered into force. July 1, 2002.