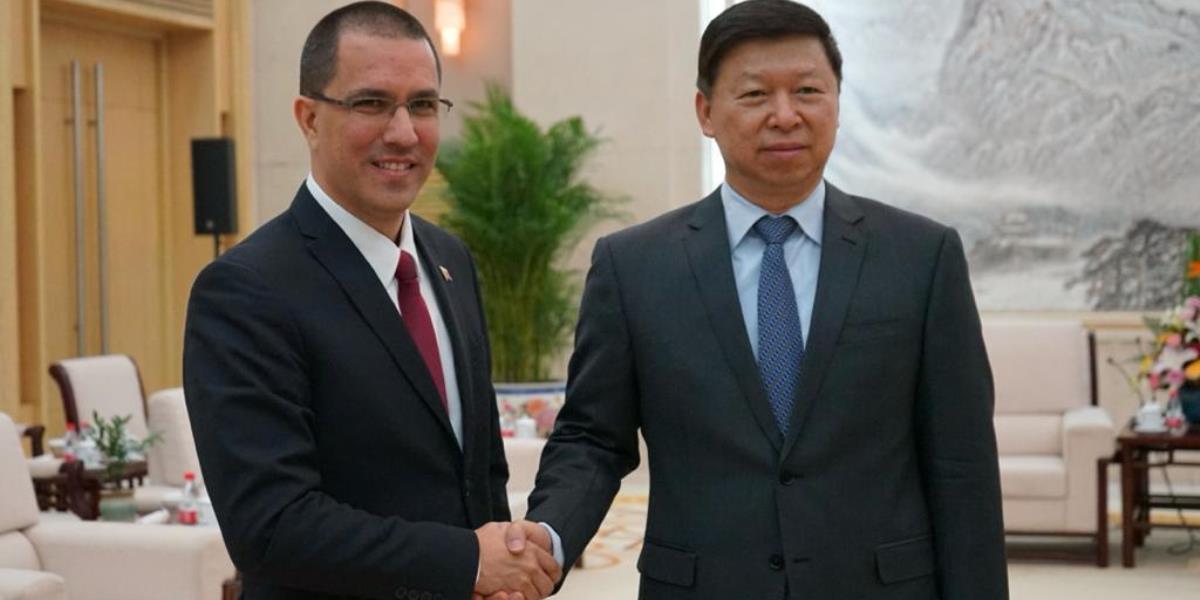 As part of his official visit to the People’s Republic of China, the People’s Power Minister for Foreign Relations, Jorge Arreaza, met Thursday with Song Tao, Minister of the International Department of the Central Committee of the Chinese Communist Party, with whom he talked about political issues inherent in the reality of each country and the strengthening of socialism that both peoples build.

The Venezuelan diplomat reaffirmed the importance of exchange and communication to strengthen relations between states, peoples and parties; “They are determining moments for the future of humanity and our links will be useful, they will be positive for that development”.

He shared that Venezuela since last year has been at the epicenter of imperialist aggression in Latin America, even in the world, and “we have responded with the conscience and conviction that our path is in the construction of socialism”, which is synonymous of independence and sovereignty as in China.

Also, Minister Arreaza said that despite the imperialist aggression, 2019 was a victorious year for the Bolivarian Revolution, for the Venezuelan people and “we show the United States government that it has to respect the sovereignty of the Latin American and Caribbean peoples, and that he cannot claim to impose his Monroe Doctrine in the 21st century as he did in the 19th century”.

The head of Venezuelan diplomacy arrived in China on Wednesday, responding to an invitation from State Councilor and Foreign Minister Wang Yi, being the first foreign minister to visit this nation in 2020.

In the Asian giant, Foreign Minister Jorge Arreaza has held meetings with Vice-president Wang Qishan and his counterpart Wang Yi, were they stressed that there is no force that can disturb the consolidated strategic partnership between the two governments and that China is a great reference for the construction of the Bolivarian Socialism.

In 2017, within the framework of his previous official visit, the People’s Power Minister for Foreign Relations developed a fruitful work agenda that included meetings with representatives of the ruling Communist Party of China.

Both nations commemorated 45 years of bilateral ties in 2019. On the occasion of this anniversary, President Nicolás Maduro stressed that the Asian giant and the South American country share the same vision of development, based on the conception of a multipolar and multicenter world, which has allowed the consolidation of brotherhood ties in favor of both peoples since 1974.