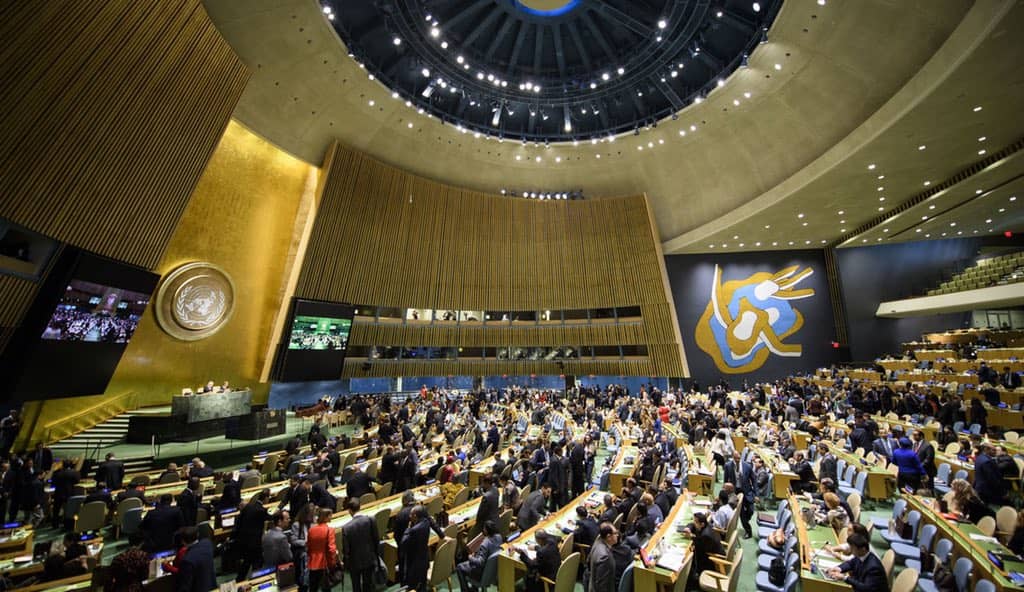 The General Assembly of the United Nations Organization (UN) on Wednesday accepted the credentials of the Bolivarian Government as the only representative of Venezuela before the most representative multilateral organization in the world, consisting of 193 countries, despite the constant attacks by the United States and its allies for delegitimizing the Constitutional Government of President Nicolás Maduro.

“The credentials of Venezuela accepted today are a guarantee of peace, because the puppet government created by the United States does not have the necessary credentials to invoke the use of force against our nation”, said the ambassador and sole representative of the Bolivarian Republic of Venezuela to the UN, Samuel Moncada, during the consideration of the “Report of the Credentials Verification Committee of the General Assembly”.

The Venezuelan diplomat stressed that once again the criminal project maintained by foreign powers is defeated in order to dominate the population through hunger and disease and plunder their natural resources.

US colonial propaganda fails at the UN

Ambassador Samuel Moncada said that the US intention to turn Venezuela into a colonial protectorate such as Puerto Rico, was rejected by the UN for being contrary to international law. He also said that the Inter-American Treaty of Reciprocal Assistance (Rio Pact), being subordinate to the UN, must respect the decision of the international community and not claim a false consent of the Venezuelan state to invade Venezuela.

“The members of the Rio Pact (TIAR) must comply with what the UN determines. Venezuela does not belong to the Rio Pact and the US cannot invent a puppet government to pretend that Venezuela is calling for an invasion supported by the Rio Pact”.

The recognition of the Bolivarian Government is a triumph for peace and international law, as well as a precedent for other states to assert their sovereignty and independence from foreign actions that recognize political minorities as puppet governments to ignore the will of their peoples .

We thank the General Assembly of the United Nations for accepting our credentials as sole and legitimate representatives of the Bolivarian Republic of Venezuela.

This decision is a recognition of the people and government of our Nation in their struggle for peace and international law.

The use of the United Nations General Assembly to attack member states represents an attack on multilateralism and the system of relations between sovereign states, as established in the Charter. Hence we must work together to avoid the establishment of a practice that would allow a group of countries to arrogate the power to designate, illegally, the authorities and diplomatic representatives of other independent countries, ignoring the sovereign will of their peoples.

Throughout this year, the government of the United States of America has unleashed a campaign of political, economic and diplomatic coercion against my country. They began with a false flag operation to violate our territorial integrity, passed to the threat of Vice-president Mike Pence in the Security Council to expel us from the United Nations and within a few days they promoted a coup d’etat that endangered the peace of the region. They also imposed coercive measures aimed at undermining the resistance of our people by hunger and disease; all in the midst of permanent incursions by military aircraft into our airspace and public threats of use of military force.

Venezuela’s credentials accepted today are a guarantee of peace, as the puppet government created by the United States does not have the necessary credentials to invoke the use of force against our nation.

Today, it is clear that independent, free and sovereign Venezuela has defeated the United States campaign, but above all, that it has the majority of the international community to defend peace and the Charter of the United Nations.