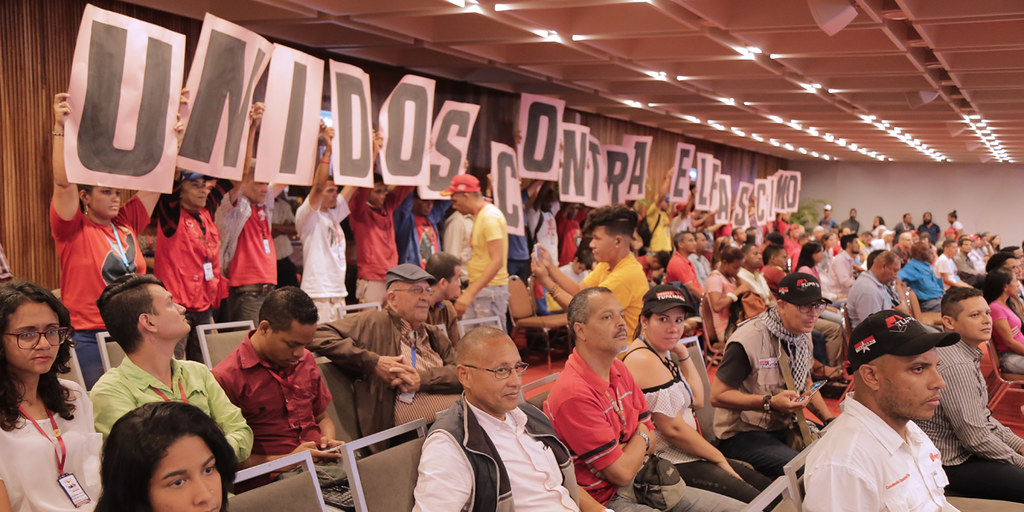 The “International Communication Congress”, gathered in the City of Caracas, Bolivarian Republic of Venezuela, from December 2 to 4, 2019, approves the following Resolution of solidarity with Latin America, the Caribbean and especially with the people of Venezuela, on the basis of the following considerations:

The imperialist policy of the White House develops, in collusion with the governments of the Lima Group and the criminal complicity of the Organization of American States (OAS), a plan of domination in Latin America and the Caribbean through coups d’états, the militarization of the region and the threat of the use of force against the peoples who exercise their right to self-determination and advocate an alternative model to neoliberalism.

In this regard, the Inter-American Treaty of Reciprocal Assistance (TIAR) is a policy that seeks to legitimize, with the help of a multinational coalition formed by governments allied with Washington, the use of military force to attack the peoples of Our America. Consequently, TIAR places in serious danger the peace of the region, democracy, the fundamental principles of the International Law and national sovereignty in this part of the world.

Today they threaten the Bolivarian Republic of Venezuela with TIAR, tomorrow they will do so with other countries because this void Treaty is part of a neo-colonial policy inspired by the Monroe Doctrine. It should be noted that Venezuela is not part of the OAS because this body, as well as its Secretary-General Luis Almagro, are instruments of United States foreign policy and, consequently, this damages the international character of the organization. For that reason, in terms of public international law, the decisions taken in that Organization were not binding on Venezuela and were therefore null and void, especially when it came to violating its sovereignty.

For these reasons, we, the communicators gathered in this Congress categorically condemn the use of force to subdue the peoples and denounce the reactivation of TIAR as part of a war plan of the Donald Trump administration. We raise our voice of solidarity in favor of peace in Our America, demand the cessation of unilateral coercive measures, reject the interventionist policy of the United States against the region, call for permanent mobilization and we call for respect for the independence of the Bolivarian Republic of Venezuela.