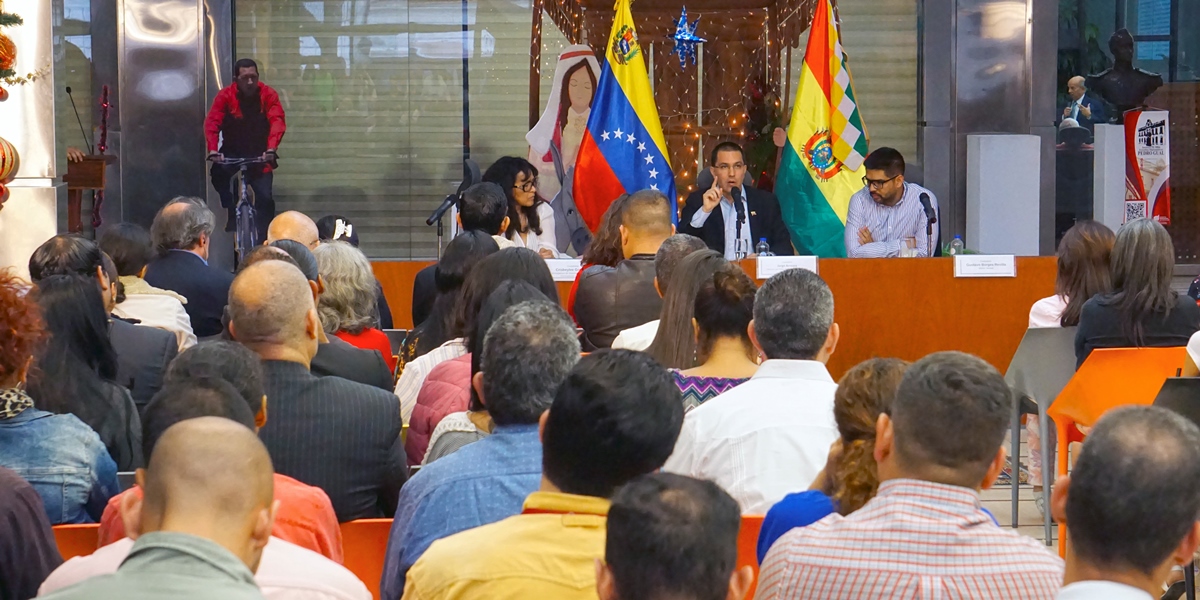 In the forum “Coup d’etat and operation against Bolivia”, held this Wednesday at the headquarters of the Ministry of Foreign Relations, in Caracas; the People’s Power Minister for Foreign Relations, Jorge Arreaza, said that “where we miscalculate, what was wrong should be reviewed, but we can not stay in the lament, we must go forward, what can we do from Venezuela? Activate solidarity, denounce the massacre; we must denounce before the international community, before the multilateral organizations”.

Along Crisbeylee González, Venezuelan ambassador to the Plurinational State of Bolivia and Gustavo Borges, director of Mision Verdad, the Foreign Minister contextualized the historical and geopolitical framework in which the coup d’etat occurs in the sister Andean nation, explaining the background of imperial interference of the United States in the region, recent parliamentary coups in Latin America, and the seizure of the Organization of American States (OAS) by the US hawks, represented by Luis Almagro.

He pointed out that in the geopolitical sphere of Latin America, Bolivia was the most stable process in the political and economic sphere, and its president Evo Morales enjoyed worldwide recognition, so that imperialism set the objective of undermining the bases of the Cultural Revolution in a silent manner, together with a great internal campaign of discrediting the indigenous leader, which had its effect on the coup.

He also recalled that Morales Ayma and his Social Movement party won the presidential elections on October 20 and that the OAS became the fundamental, institutional instrument for the coup d’état, since the same day of the election, in the night, it recommended a second round because the results that day were not credible.

For her part, Ambassador Crisbeylee González commented about the actions of persecution, the surrounding of the embassy and aggression suffered by the Diplomatic Mission in Bolivia by representatives of the de facto government, even long before the October 20 elections.

What happened in Bolivia?

Gustavo Borges Revilla, director of the Mision Verdad, began his intervention with the question: What happened in Bolivia? Immediately stressing that it is not a local problem in this country, but it’s framed in a process of systematic aggression against governments from Latin America which resist receiving orders from the Western Empire.

He said that attempts are made to destroy Bolivia from the inside, with internal actors who executed a very clean operation. He considered the burning of the Wiphala flag as a very symbolic fact of that attack on the plurinational state, since it is a very strong description of the intention to break the memory of the South American nation itself.

Borges Revilla provided two data to understand who benefits from the coup: “Bolivia recently signed an agreement with China for the exploitation of lithium and with the Russian Federation for the production of fertilizers that were going to supply the region and leave the Western companies outside the supply of this item. In addition, the stoppage of Bolivian gas distribution benefits Brazil”. He concluded that the departure of Evo Morales gives profit to the Western political class, led by the United States.