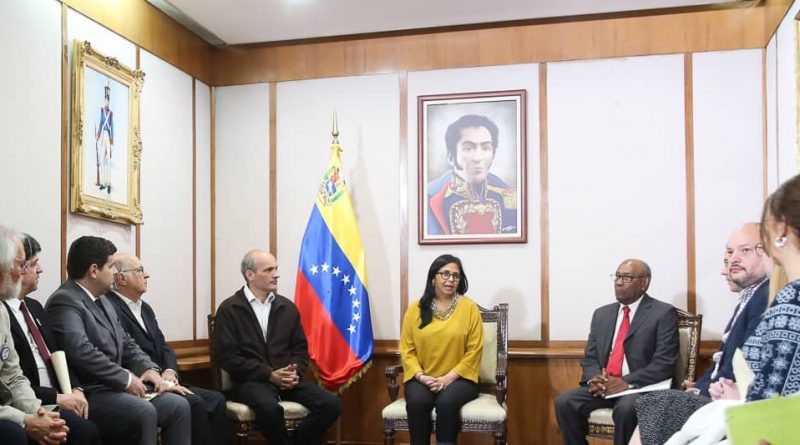 The Executive Vice-president of the Republic, Delcy Rodríguez, on Tuesday led a meeting with representatives of the International Coalition of Jurists for Peace and Democracy – Mission Venezuela, in order to show the policies that consolidates the Bolivarian Government on Human Rights.

On this occasion, the members of this important human rights organization, come from Brazil, Spain, Argentina, Italy and Mexico and make contributions in this area under a demanding scientific, political and academic rigor.

In that order, the defenders expressed their concern about the vile economic, financial and commercial blockade imposed by the United States government on our nation affecting the lives of millions of Venezuelans and preventing their full development.

Similarly, they unanimously rejected the terrorist actions perpetrated by violent groups that, with xenophobia and hate, attacked the Venezuelan embassy in Brazil.

In addition to this visit, jurists have been able to exchange views with representatives of the Public Powers such as the National Constituent Assembly, the National Electoral Council and the Public Ministry.

In this context, upcoming meetings with organizations and social movements of the country are expected in order to exchange contributions on human rights.

The International Commission of Jurists is made up of 60 eminent judges and lawyers from all regions of the world, and its mission is the promotion and protection of human rights, the promotion of respect for the rule of law and the self-determination of peoples by using their legal experience to develop and strengthen international justice systems.

It should be noted that this Commission was established in 1952 and has an advisory status before the UN Economic and Social Council since 1957 and it’s active on five continents.