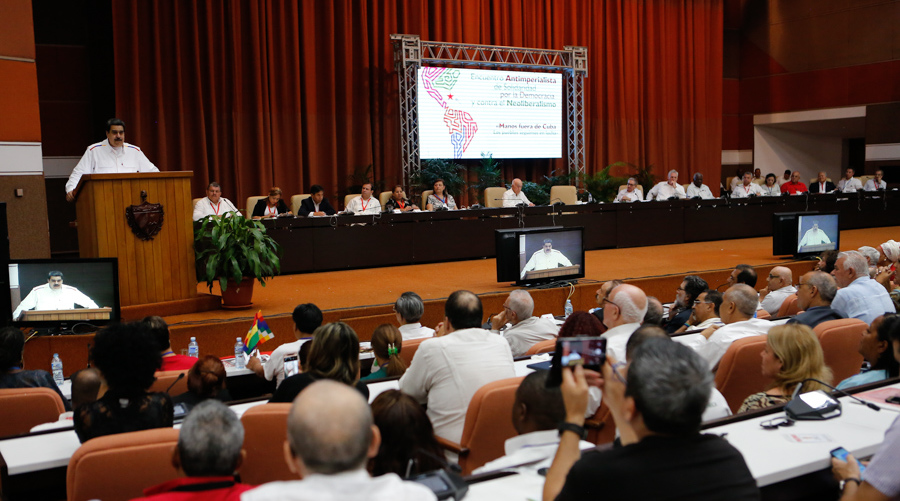 Resistance fronts in Latin America and the Caribbean unite against neoliberalism

During his right to speak at the Anti-Imperialist Meeting of Solidarity for Democracy and Against Neoliberalism, the president of the Bolivarian Republic of Venezuela, Nicolás Maduro Moros, assured that resistance fronts have emerged, promoted by popular power for the new Latin American geopolitics and Caribbean.

“A new situation in the geopolitics of the region begins to form (…) a new wave (…) the spaces of the future for a new situation of alternatives”, in the fight for democracy and against imperialism, he said.

In the first place is the Bolivarian Alliance for the Peoples of Our America – Peoples’ Trade Treaty (ALBA-TCP), as a “progressive front”; in which the president of Mexico, Manuel López Obrador, and the newly elected presidents of Argentina and Uruguay, Alberto Fernández and Daniel Martínez, play a decisive role.

Following there are the popular movements, as has been the case in countries such as Ecuador and Chile, which have taken the streets in protests against the neo-liberal measures imposed by the International Monetary Fund (IMF).

“You have to articulate, unite, break down barriers, end the division, so we can see and find each other (…) but those who can articulate the union are the people”, said the President to highlight that only in the union is the strength to defeat colonialism and make Latin America and the Caribbean a world power.

“In Latin America and the Caribbean we are brothers of root and blood (…) We have a common destiny”, he concluded.