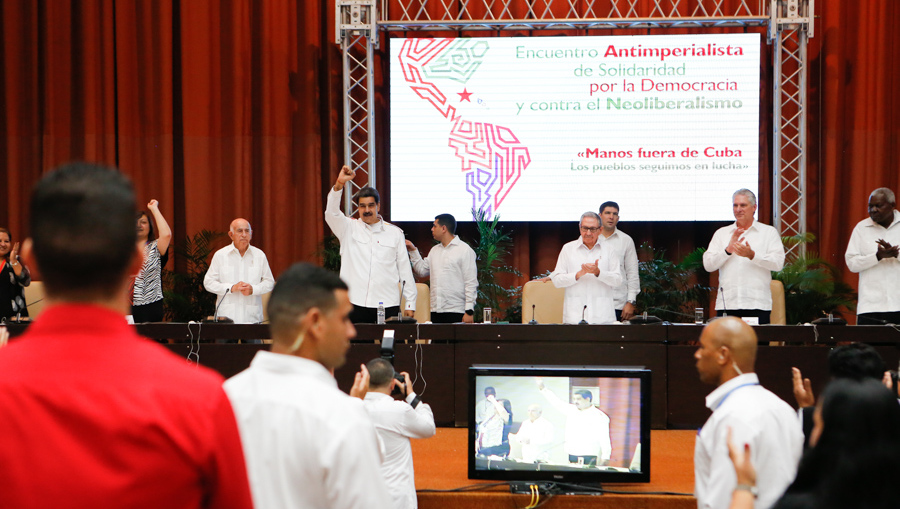 The president of the Bolivarian Republic of Venezuela, Nicolás Maduro Moros, arrived on Sunday at the Convention Center in Havana, Cuba, to participate in the closing ceremony of the Anti-Imperialist Meeting of Solidarity for Democracy and against Neoliberalism.

The meeting convened by the Cuban Chapter of Social Movements and the Cuban Institute of Friendship with Peoples brings together more than 1,200 delegates who address the new challenges of the left in the face of the growing hostility of imperialism.

Social movements, parties, political leaders, as well as intellectuals and academics are added to the struggle for the self-determination of the peoples, who in interventions advocate respect and solidarity with the people of Cuba against the extreme violations of Human Rights generated by the economic blockade and the campaigns to discredit the Caribbean nation, as well as the threats of the hegemon to the region and the new forms of aggression to suffocate the emerging economies of Latin America and the Caribbean.

This Friday began the Anti-Imperialist Meeting of Solidarity for Democracy and Against Neoliberalism, in which more than 95 countries participate, with the aim of raising the complaint of the escalation of measures and coercive actions by the United States against the peoples of the world .