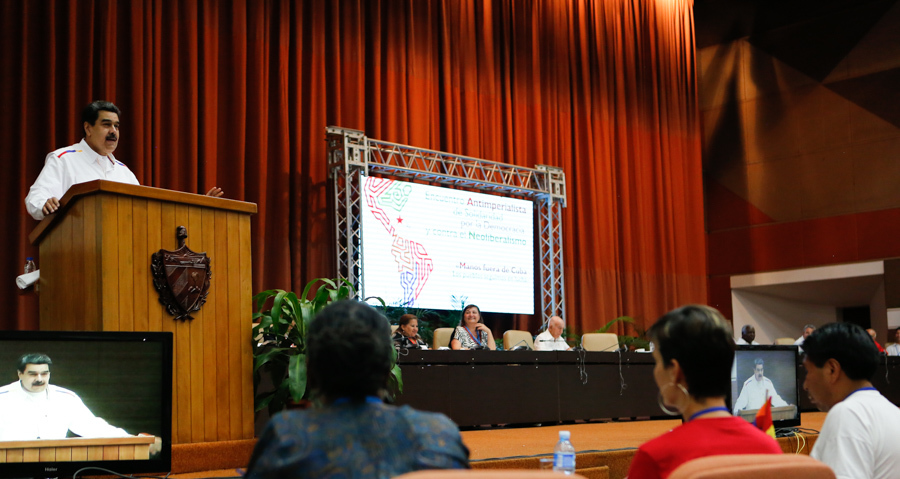 Latin America and the Caribbean expressed their support for Evo Morales, reelected president of the Plurinational State of Bolivia in the face of the coup d’etat developed against him.

Regarding to the Anti-Imperialist Meeting of Solidarity for Democracy and against Neoliberalism held in Havana, Cuba, Venezuelan President Nicolás Maduro Moros exalted the support provided by the Latin American and Caribbean region to President Morales.

The space was conducive for more than a thousand delegates to raise their voice against fascism, neoliberalism and racism that they wanted to impose in Bolivia since the last presidential elections, in which the indigenous leader (Evo Morales) won the victory with 47,08% of the votes counted and in this way extend his mandate until 2025.

“Tell that the Indian one will resist and will succeed in the face of this fascist threat”, Maduro said from the Convention Center of the Greater Antilles.

“I am sure that the native peoples, miners, indigenous people and young people will go out on the streets every day they need to support Evo -Morales- (…) from here, from Latin America all our support for Evo”, added Nicolás Maduro during his speech before the closing plenary of the anti-imperialist meeting, held this Sunday in the afternoon.