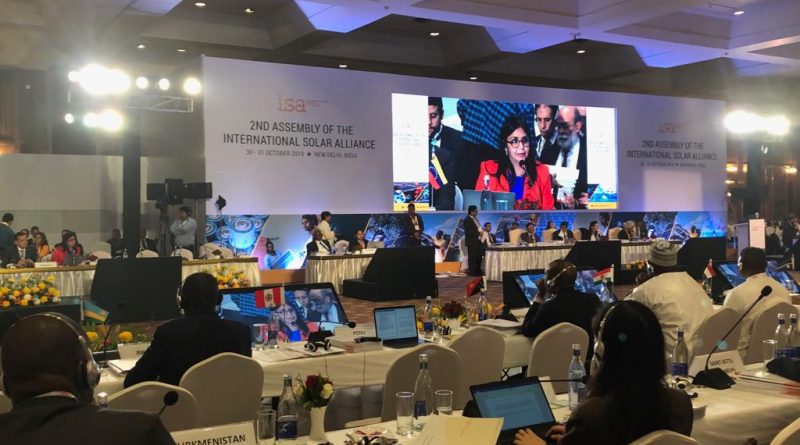 The Executive Vice President of the Republic, Delcy Rodríguez, participates in the II Assembly of the International Solar Alliance (ISA), from the Hotel El Ashok, Chanakyapuri New Delhi, in the Republic of India.

This important management to which Venezuela joins, is part of the commitment of the Bolivarian Government that continues to reaffirm the purposes of the Fifth Historical Objective of the Plan de la Patria 2019 – 2025, promoted by the President of the Republic, Nicolás Maduro, through which The Executive seeks to contribute to the preservation of life on the planet and the salvation of the human species.

The purpose of this activity is to facilitate and accelerate the large scale deployment of solar energy in developing countries, with the objective of satisfy the growing demand for energy and helping to fight climate change.

The ISA, whose headquarters is in Gurugram, is made up of more than 80 countries with high potential for generating solar energy resources, located between the Cancer and Capricorn Tropics.

The activity was also attended by the Minister of the Popular Power of Economy and Finance, Simón Zerpa, the Vice Minister for Asia, Middle East and Oceania, Ruben Darío Molina and the Venezuelan Ambassador accredited in India, Coromoto Godoy.

Tags: Fifth Historical Objective of the Plan de la Patria 2019 – 2025, II Assembly of the International Solar Alliance in India, The Executive Vice President of the Republic