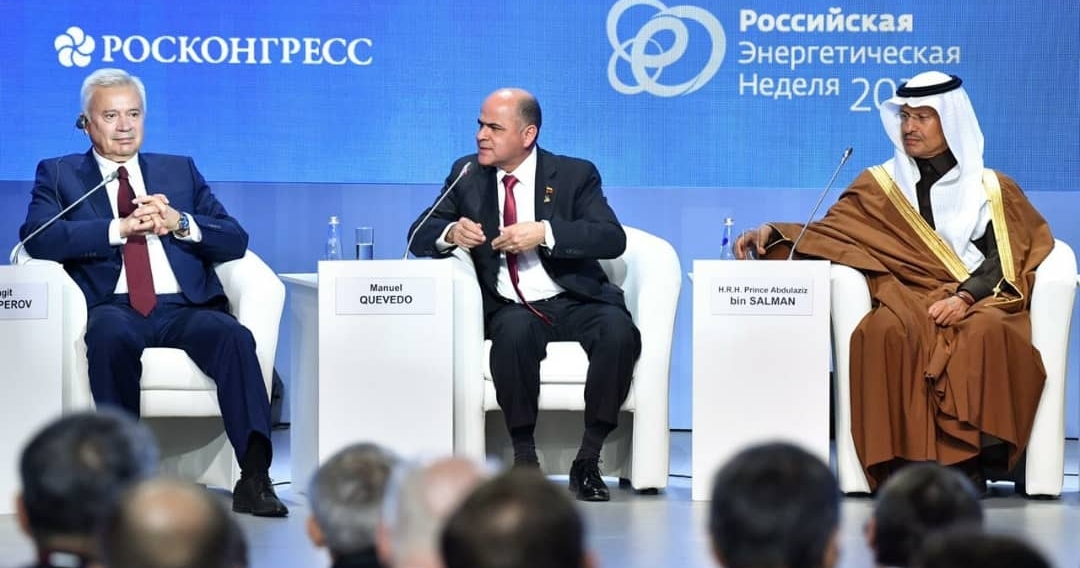 This Thursday, the People’s Power Minister for Petroleum and president of Petróleos de Venezuela, S.A. (PDVSA), Manuel Quevedo, participated in the plenary of the Russian Energy Week: “Maintain energy connectivity in an unstable world”, a previous activity framed in the celebration of the XXI Ministerial Meeting of the Gas Exporting Countries Forum.

In his speech, the president of the XXI Ministerial Meeting of the Gas Exporting Countries Forum highlighted the importance of the fundamental role of the oil market at present because in his opinion it “cannot be used as a tool to attack economies In the world, the oil, gas and petrochemical market has to be used for the development of the peoples. We have to make a panel with world leaders to accept this commitment”.

Likewise, Minister Manuel Quevedo referred to the constant disturbances and attacks to which the Venezuelan nation is subject. “We analyze the foundations of the States, the projections and the behaviors of the economies of the producing countries, consumers and the global market, but we also have to focus on the disturbances. Venezuela has been a great actor in OPEC since its founding, a reliable oil producer for all markets, but that reliability has been disturbed to levels of suffocating the Venezuelan economy”.

“We have had attacks on the national electricity system to paralyze the refineries, we also suffered an attack to threaten the life of President Nicolás Maduro. Without a doubt, there are political objectives upon the nation that has the most important oil reserves and that will guarantee the development of all the countries in the world”, explained Quevedo.

In this regard, he added: “This year we have suffered attacks on the national electricity system, we have reached levels below usual production. A producing country that in the past exceeded 3 million barrels per day and with growth plans of 5 million. But, as we have said in OPEC +, we have made an involuntary contribution to the market and we will return to those levels because we are working with our strategic partners to achieve it”.

Finally, the head of Petroleum and president of PDVSA said: “In Venezuela we are optimistic, we have had enough disturbances in 2019 and we trust that in 2020 we will achieve stability within the framework of the OPEC and OPEC + declaration, which so far has achieved impressive positive results for the stability of the world oil market”.

“The 2019 disturbances must be left behind, in 2020 the economies of consuming countries will continue to grow and the important actors, from the point of view of consumers and producers, see the world oil market with much optimism and stability. However, we will not answer calls receiving instructions. The only instructions we attend are those of dialogue, peace and development of the Nation”, concluded Quevedo.