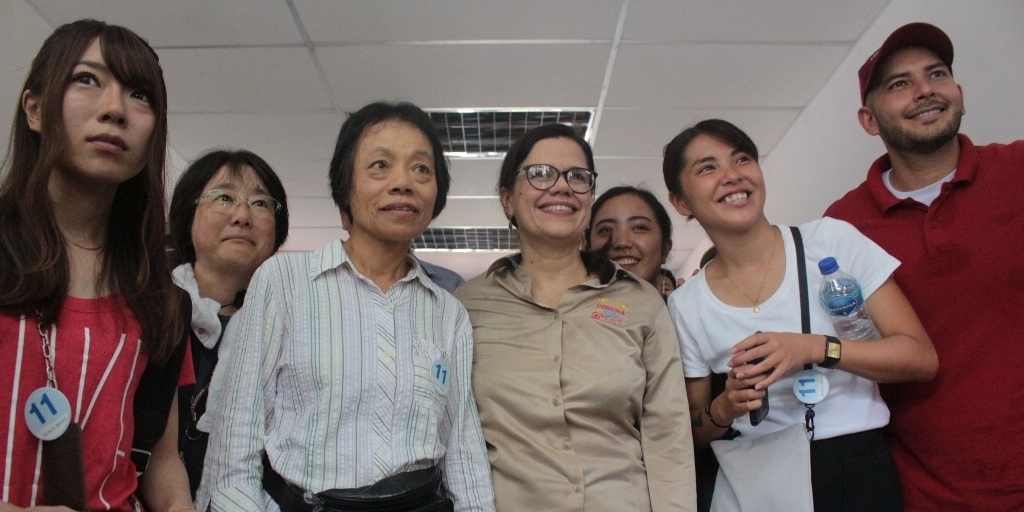 80 people aboard the Peace Boat that arrived Thursday at La Guaira port, with a crew of more than 1,200 people from the Asian continent, were taken to a tour to the Socialist Commune of Guaicamacuto , with the objective of showing the political, organizational, economic, productive and social forces of the Communes in Venezuela.

As responsible for the tour, was the People’s Power Minister for Communes and Social Movements, Blanca Eekhout, who in the company of Vice-minister José López, the communal constituent of La Guaira, Jazmín Reyes, showed the social and productive achievements of the commune Guaicamacuto.

Tourists learned about the work of organized people’s power with a visit to the Hugo Chavez Integral Health Center and the Bolivarian Integral School Francisco Fajardo. During the deployment, the head of Communes said, “Your presence breaks the media blockade against Venezuela, since this financial and shipping blockade is not only to prevent access to food, medicine or commerce, but also to prevent the truth of our peace to be shown to the world”.

The minister described what the attacks of the empire have meant for the Venezuelan people, and their “effort to prevent Venezuela from expressing its truth to the world, one might think that it is because of the wealth of our country, since imperialism always wants to take over of the resources of a country, such as the oil reserves that are the largest in the world, as well as the reserves of gold, strategic minerals and various resources for the development of technology and industry”.

For Eekhout, the attack is mainly due to the resistance that the Venezuelan people have had and the example of dignity that they show to the world, “but before all this trap and provocation, the Bolivarian Government’s response was not war or wild repression, but to keep the peace free and call for constituent national processes, as a full body to make the great plenipotentiary decisions, to transform what has to be transformed”, Eekhout said.

She called to the strengthening of communication beyond media power, “a human and true communication based on love (…) The Communes are the fundamental principle to maintain the revolution and the construction of our socialism with power in each territory promoting a new model of economy in the country, the Communal State”.

Leo Kusafuka, from the International Coordination of Peace Boat, expressed his opinion of the communal experience, “we want to thank all Venezuelans who have received us with so much love and affection, we are happy to be in the land of Bolívar and Chávez. We will continue to work together on the issue of peace with this democratic system of full freedom. Social missions are something unique, and this work must be a democratic model for the world”.