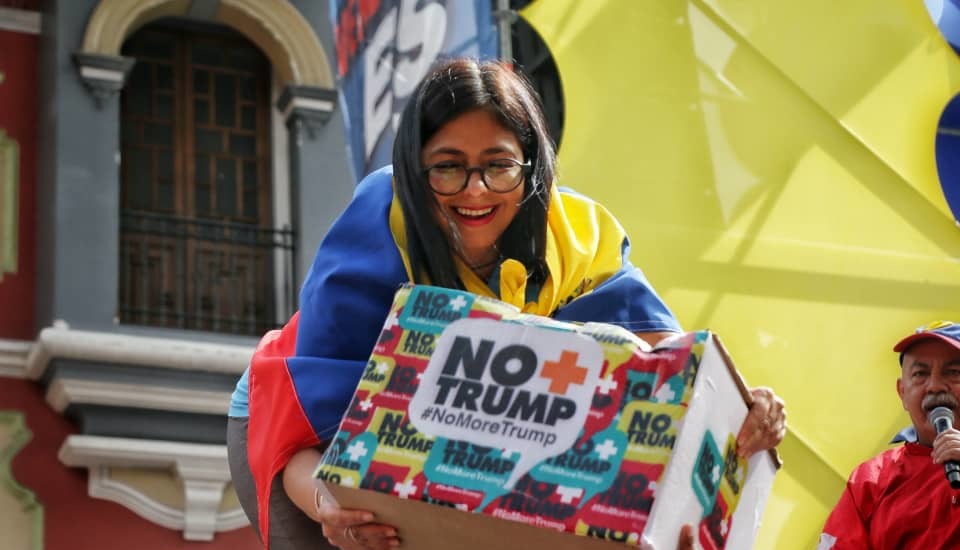 Vice-president Rodriguez: Campaign No More Trump is the protest of the people for the Peace of Venezuela

During the reception of the boxes and booklets with the 13 million 287 thousand 742 rubrics that will be taken next week to the United Nations Organization (UN), Executive Vice-president Delcy Rodríguez said that the signatures are the answer to peace and the discontent of the people and the world over the illegal and application of unilateral coercive measures towards the Caribbean nation.

The No More Trump campaign began on August 10 at the initiative of the Head of State, after the United States government signed an executive order in early August that formalized the economic, commercial and financial blockade against the Homeland, which has had multiple negative impacts, directly affecting the rights of all Venezuelans.

The Executive Vice-president extended a strong hug from President Nicolás Maduro and stressed that before each national commitment, “There is the courageous response of the Venezuelan people that tells the Secretary General of the United Nations, with these more than 13 million signatures, We do not want war Mr. Trump, we want peace, tranquility, we want to develop as a people and work. So here we ask the United States Government and its satellite countries to stop meddling in the affairs of Venezuela”.

Rodriguez also took the opportunity to thank the support of the people of Cuba, “who joined this fight in a single battle trench for two sister revolutions, the revolution of Marti, Fidel, Che, the Bolívar Revolution, of Chávez, in a single combat trench against the imperial powers that with their hatred have come against our peoples, executing an infamous criminal blockade to suffocate us, but the response of the people of Cuba, of the people of Venezuela, is to keep our dignity intact, on foot, we will never kneel”