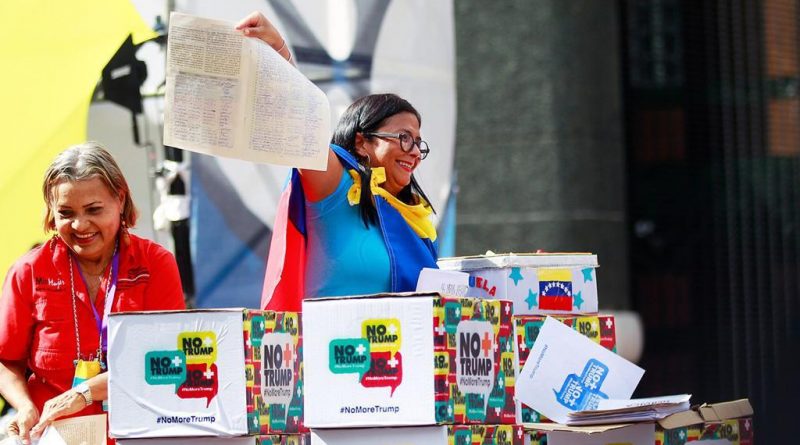 The Executive Vice-president of the Republic, Delcy Rodríguez, informed that the 13 million 287 thousand 742 rubrics that were collected during the No More Trump campaign will be taken next week to the United Nations Organization (UN).

“We are going to the United Nations with the truth, to fight for our country, but accompanied by the soul of all of you who stamped these signatures with love for Venezuela, with passion for the country, for our freedom, our independence”, Rodriguez said from the adjacencies of the headquarters of the Vice-presidency.

In addition, she pointed out that the president of the National Assembly in contempt, Juan Guaidó, is sending a delegation to the UN. “You well know what Mr. Guiadó is involved in, yesterday the Vice-president of Communication showed terrible evidence of political filth, we had never seen in our history, after Santander’s betrayal of Bolivar, such filth in the exercise of the politics”, she said.

He recalled that yesterday, the Bolivarian Government showed the people of Venezuela the complicity that exists between the criminal gang of the opposition leader, a dangerous narco-paramilitary band from Colombia, known worldwide as Los Rastrojos and the Government presided by Iván Duque.

“There is the evidence, how they withdrew Guiadó from Venezuela as what he is, like a criminal, doing the criminal route, supported by the band Los Rastrojos. We are going to take these serious denunciations, the evidences and much more to the United Nations”, she said.