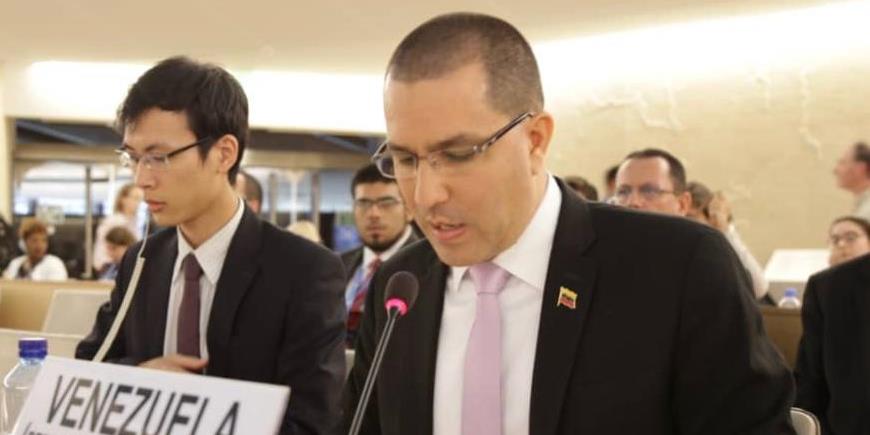 The Foreign Minister of the Bolivarian Republic of Venezuela, Jorge Arreaza, raised on Thursday the need to review the criteria for the election of the member states of the Human Rights Council of the United Nations Organization (UN), because of their position before the unilateral coercive measures.

At the plenary of the forty-second session of the Geneva-based United Nations body, the Venezuelan diplomat emphasized that there should not be a formal member of the Council imposing or facilitating these measures.

“Nor members who do not condemn these measures because then, perhaps, they will not be violating human rights in their territories but they are facilitating, promoting or violating human rights in the territory of third countries and that would morally and ethically prevent them from being members of this Council. We believe that the criteria for the election of the member States of this Council should be reviewed based on their position in the face of unilateral coercive measures”, he suggested.

Foreign Minister Arreaza recalled, in this context, that the Non-Aligned Movement (NAM) – whose presidency has held by the Bolivarian Republic since September 2016 – recently adopted a resolution that urges states to refrain from applying the so-called “sanctions” which are contrary to international law and the Charter of the United Nations.

In his speech, the People’s Power Minister for Foreign Relations cited the special rapporteur Idriss Jazairy about the negative impact of unilateral coercive measures, who states in his report recorded at the 42nd session of the Human Rights Council that “unilateral economic sanctions adopted by the United States and other countries, coupled with a multifaceted economic war, have played a far from negligible role in the paralysis of Venezuela’s economy”.

The Venezuelan Foreign Minister also denounced that the unilateral coercive measures imposed by the White House to Caracas have resulted in an economic and commercial blockade against Venezuela, which includes the freezing of assets owned by the Republic abroad.

But in addition, he added, they have blocked funds of the Republic in different banks around the world in an amount that exceeds USD 7,000,000,000.

The diplomat stressed that unilateral coercive measures generate a negative impact on the enjoyment of the human rights of the inhabitants of the State, with special emphasis on the most vulnerable groups as well as denied that there are exceptions in the illegal blockade of the United States to Venezuela.

On the other hand, he highlighted the efforts of the National Executive to attend to the Venezuelan population and the work it is doing hand in hand with the various United Nations agencies present in the country to develop a response plan.