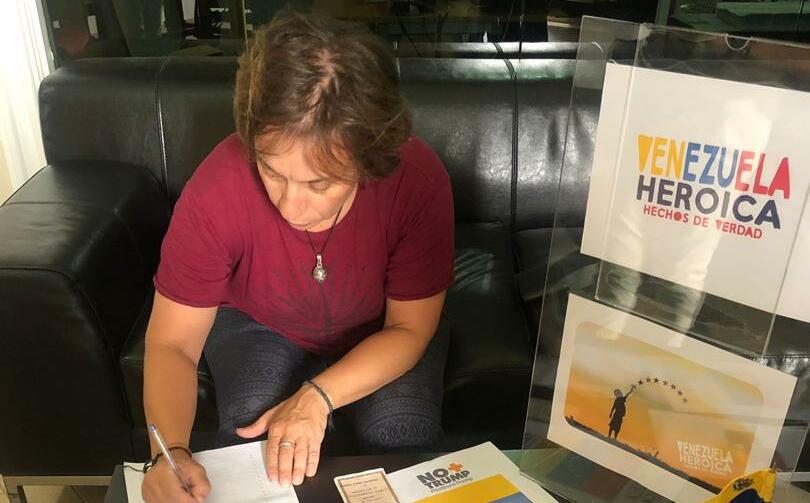 In Naples, the Solidarity Assembly with Venezuela is held within its protest campaign “No More Trump”

Political activists and representatives of support groups with Venezuela in Naples, met in a Solidarity Assembly, at the headquarters of the Venezuelan Consulate General to express their support for the international protest No More Trump.

In the declaration they expressed that “the Movement of solidarity with the Bolivarian Revolution, associations, political activists, intellectuals, professors and students that are part of the Assembly of Solidarity, join and support the International Campaign #NoMoreTrump”.

Regarding the economic measures, they affirmed that “it is about the deepening and formalization of the blockade that we have been denouncing since the beginning of this year 2019 through the global campaign #TrumpDeslockaVenezuela. We strongly condemn the economic and financial blockade causing the illegitimate theft of Venezuelan assets abroad and the freezing of bank accounts and transactions dedicated to the acquisition of medicines and food for the Venezuelan people”.

The Solidarity Assembly has mobilized personalities from politics and culture such as Nobel Peace Prize Francesco Gnisci Bruno, former Senator of the Italian Republic Luigi Marino and Sandro Fucito President of the Communal Council in Naples. It has also achieved the declarations of solidarity of political parties such as Power to the People, Communist Refoundation, CARC Party, as well as associations among which are; the Association “Russkoe Pole”, the Association of Community and Extra-Community Workers (ALEC), the association ARCIGAY (Napoli), the Cultural Association “GalleryArt”, the Cultural Association “Massimo Gorki” and the Collective “Grupo Gramsci”.

Italian academics, members of the Italian-Venezuelan community and artists also joined the call, reaffirming the unconditional commitment to accompany the Bolivarian people in this campaign, becoming multipliers and defenders of the truth and against the blockade towards Venezuela.