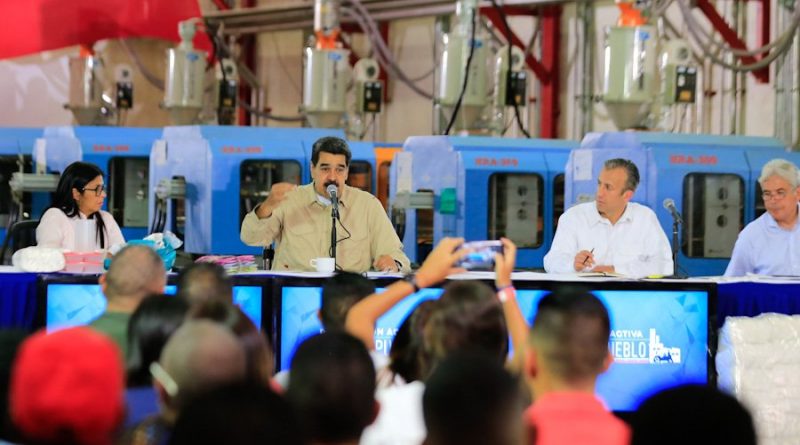 The Executive Vice-president of the Bolivarian Republic of Venezuela, Delcy Rodríguez, offered a balance sheet about her work visit to the Russian Federation, with the aim of continuing to strengthen the alliances and brotherhood relations between Venezuela and the Eurasian nation.

“One of the first meetings we had was with the co-chair of the Russian part of the High Level Intergovernmental Commission, where we reviewed all the agreements in different areas of cooperation, moving forward with good news that you will soon be able to give Venezuela. New areas of cooperation in the economic field, extraordinary for our national development”, she announced from the Tuyero Socialist Plastic Industrial Complex.

Rodriguez gave a review of the meetings she held with businessmen and Russian authorities, in the economic field.

“In the coming weeks we will be visiting different delegations in areas such as mining, agriculture, to continue developing the joint plan of mutual benefit. It is very important, it is an alliance based on the benefit of both countries”, she said.

“Two countries in an unprecedented international geopolitical alliance, because it is precisely about the defense of the Charter of the United Nations, of sovereignty, of independence, of the self-determination of peoples. Joint strategies for the defense of multilateralism and international law were drawn up”, stressed the Executive Vice-president in relation to the recent visit of the People’s Power Minister for Defense, Vladimir Padrino López, to the Eurasian country.

During her trip to the sister nation, Rodriguez said that Russia ratified its commitment to the Government of the President of the Republic, Nicolás Maduro and its friendship with the Venezuelan people.