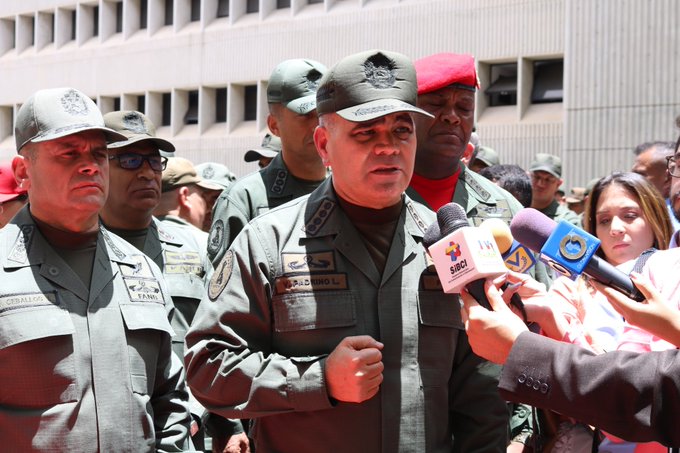 Minister Padrino López: It is time for national unity to face US aggressions

The Defense Minister, Vladimir Padrino López, called on Tuesday to the national unity to face this new aggression of the United States government to Venezuela.

In the act of collecting signatures as part of the No More Trump Campaign, in rejection of the economic blockade against the country, held in Fuerte Tiuna, in Caracas, Minister Padrino López said that in “Venezuela there will be no intervention, neither coup d’etat, de facto government and much less, one of transition”.

He expressed feeling “sorry for others” for the “stateless” who support the decisions of US President Donald Trump against the constitutional president, Nicolás Maduro.

“We are not going to allow anyone to take away from Bolívar’s sons and daughters that what we have earned with so much love”, he said.

He stressed that the empire with new US coercive measures against the Venezuelan people seeks to divide and wipe out the Bolivarian National Armed Forces (FANB).

In this regard, he said that the FANB stands firm in the face of aggression and invites the population to the union, because this is an issue against all Venezuelans.

“Here we all suffer, this is a matter of the Homeland. It is the moment of national unity, it is the moment of Venezuela, not of parties. Enough of offenses! Enough of infamy! Let us remember the oath we made to defend our Homeland, our democracy, our republican principles”, he said.

In this regard, he assured that there must be justice. “So much damage to the people, to the nation, to its riches, so much evil, there has to be someone who answers for that. Everything that the US empire is doing is unforgivable, we will actively resist”, he emphasized.

The FANB Strategic Operational Commander, Remigio Ceballos, after stamping its rubric in repudiation of President Trump’s new order, stressed that “Venezuela is not alone, we are planted before threats, without fear, for that we are trained”, he emphasized.