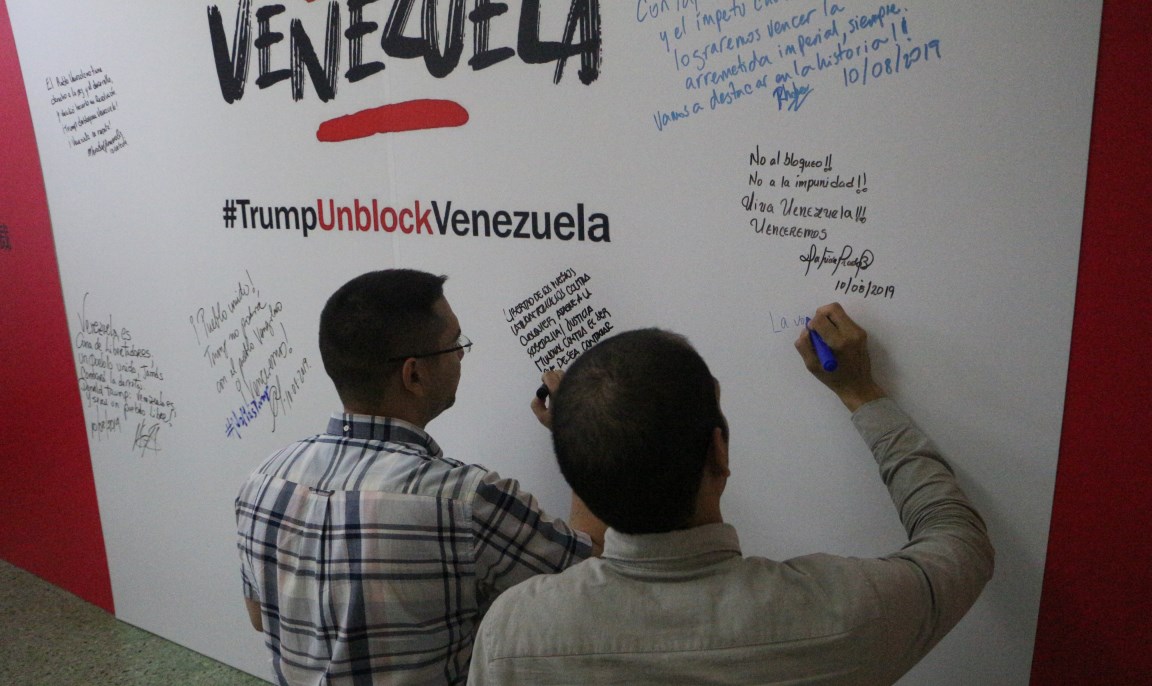 The Embassy of the Bolivarian Republic of Venezuela in the People’s Republic of China inaugurated a mural to accompany the actions within the framework of the No More Trump campaign that rejects the economic cornering policy that the US administration has undertaken through the imposition of Unilateral coercive measures, with the purpose of generating a climate of destabilization and anxiety in the country.

The protest day began this Saturday, August 10, with the inauguration of the mural where, initially, Venezuelan diplomats and officers of the Military Attachment expressed messages to accompany the protest against the president of the United States, Donald Trump, and demand respect for Venezuelan self-determination.

The canvas will be available in the diplomatic mission for Venezuelans and friends in China to join in a single clamor: the cessation of aggression that seeks to suffocate the Venezuelan economy.

“The Venezuelan people have the right to peace and development, and decided to do so in Revolution. Trump unlock Venezuela! Venezuela is respected!” Is one of the messages expressed demanding respect for the right of the nation to choose its future and its own economic, political and social model.

The President of Venezuela, Nicolás Maduro, summoned Venezuelans and peoples of the world to participate in the international day of protests against US coercive measures and white supremacy.

Through the social networks, the # NoMásTrump label has had repercussions on digital trends worldwide and it is useful for users to report the damages caused by the United States sanctions to the country.

In recent months, the White House has increased aggressions against Venezuela. In the last Executive Order signed by Trump, all the assets of the Bolivarian Government in the United States are frozen, an arbitrary action that has been described as economic terrorism against the Venezuelan population.