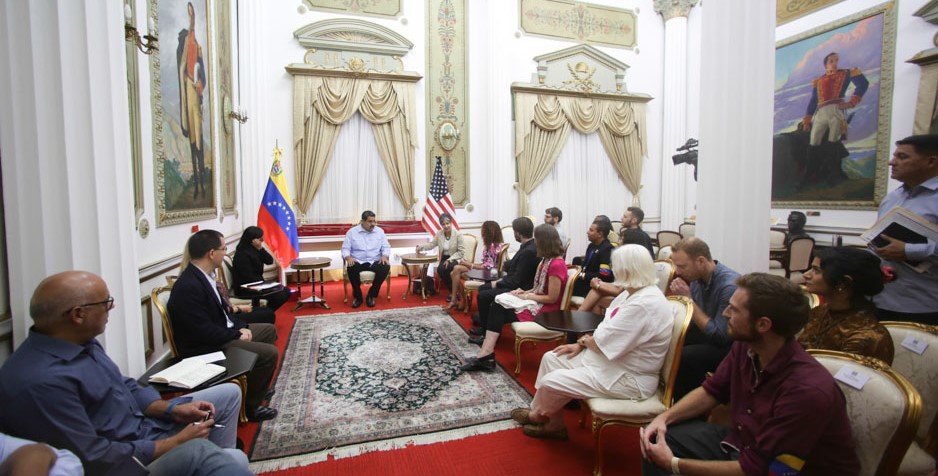 From the Miraflores Palace, the president of the Bolivarian Republic of Venezuela, Nicolás Maduro, received and recognized the activists who make up the Collective of Protection of the Embassy of Venezuela in Washington with the replica of the Saber of Simon Bolivar as a token of gratitude to their work of protection against the threats of illegal taking by representatives of Juan Guaidó and the aggressions sponsored by the White House.

The activists remained for more than a month and a half demanding respect for international law and Venezuelan sovereignty until their forced eviction on May 13.

The Collective is made up of various organizations and social movements, such as Veterans For Peace, Popular Resistance, Mintpress News, Codepink, Answer Coalition, Black Alliance For Peace and Grayzone.

Since the beginning of the year, the Venezuelan government and people have been victims of a political and economic siege promoted by the Donald Trump Administration and supported by other governments in the region. This began with the Declaration of the Lima Group that sought to transfer the powers of the National Executive to the Parliament and it was exacerbated by the illegal self-proclamation of Deputy Juan Guaidó and the rupture of relations between the South American country and the United States.

The American activists gathered in the XXV Edition of the Forum of Sao Paulo that took place from July 25 to 28 in the city of Caracas and that brought together more than 720 delegates and delegates from various countries of the world.

Accompanying the president Maduro this Tuesday was the First Combatant of the Republic, Cilia Flores; the People’s Power Minister for Foreign Relations, Jorge Arreaza and the Vice-minister for North America of the Venezuelan Foreign Ministry, Carlos Ron.