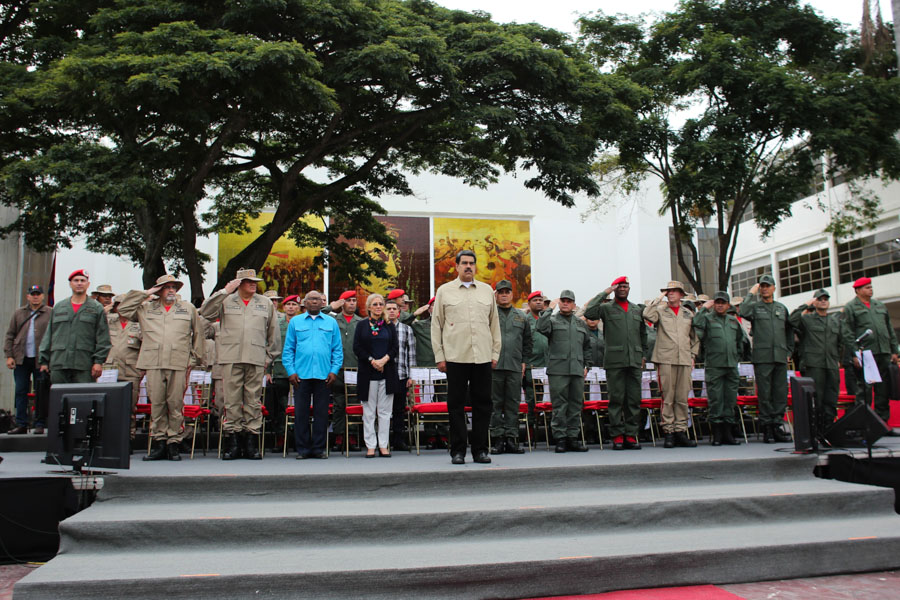 Military Academy of the Bolivarian Army, Caracas .- “More than 80 percent of Venezuelans reject the call for a military intervention on our country”, said the constitutional president of the Republic, Nicolás Maduro Moros, referring to various studies of public opinion expressing “the union of the people of Venezuela in defense of sovereignty, self-determination of the sacred nature of Venezuela to peace”.

During the graduation and promotion of the Bolivarian Militia, held at the Military Academy, in Fuerte Tiuna, the Head of State said that “recently the assembly in contempt made an act in a public square and announced that they had approved the reinstatement of the Inter-American Treaty of Reciprocal Assistance (TIAR) of Venezuela and that it was the first step in calling for an invasion of Latin American armies into Venezuela”.

In this regard, Maduro stressed that in civic-military union Venezuela will continue to build peace and assigned the Bolivarian Militia three tasks for the defense of the national territory; as the first mission to defend the right to peace, coexistence, respect for laws and national harmony, secondly to be prepared to defend with arms from any foreign imperialist aggression that is intended anywhere in the country and finally prepare to search for the “imperialist armed enemy” anywhere in America.

In a scenario of interference actions by the US empire, the Dignitary stressed that the peace of the country will not be broken by “an extremist minority of self-proclaimed fascists who make crazy policies” and added that the nation will continue to guarantee the rule of law and justice in civic-military union, hand in hand with the Republican conscience and the loyalty of the Bolivarian National Armed Forces.