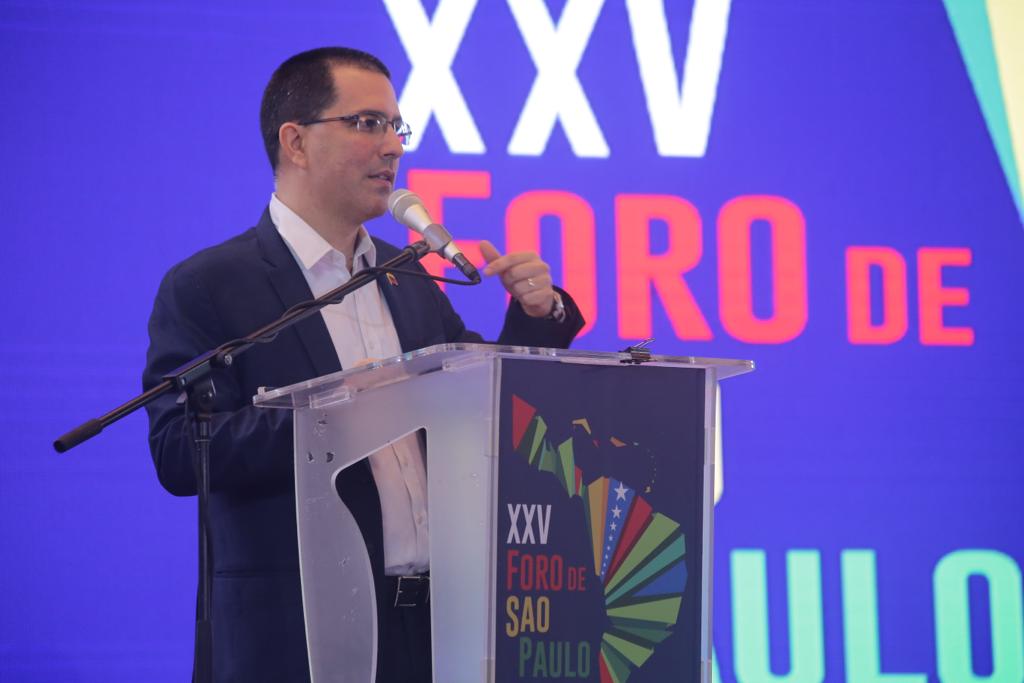 Foreign Minister Arreaza: The left-wing must form a common agenda to build together

Within the framework of the XXV edition of the Sao Paulo Forum, the Foreign Minister of the Bolivarian Republic of Venezuela, Jorge Arreaza, urged the political parties, social movements and leftist leaders of the world to form a common agenda where the fundamental objective is the social protection of the peoples attacked by the American empire.

This statement was made by the Venezuelan diplomat during the plenary of the aforementioned forum that is held at the facilities of the Alba Caracas Hotel that brings together national and international delegates from Latin America, the Caribbean, Europe, Asia, Africa and North America, who debate about the imperial attacks and the hegemonic policy that US government keeps trying to impose on the world.

“They will not be able to bend the children of Bolívar and Chávez, may this forum serves to structure a common agenda on issues of education, housing, health (…) We are a government that despite the blockade have not sacrificed the social protection of the people, without this system the people would be a direct victim of the economic blockade”, said the Foreign Minister.

In this regard, the People’s Power Minister for Foreign Relations, made a review of what has been the systematic attack of the US government against countries in the region, including the coup d’etat to Manuel Zelaya as president of Honduras, as well as the economic aggressions through unilateral coercive measures imposed against the Venezuelan people.

“Despite the continued aggression that we have been suffering for 20 years, we are still standing. Since they are attacking us bilaterally and unilaterally we have to appeal for multilateralism, for that decision that was taken after World War II when the United Nations Organization was formed, there, the path of collective decisions was taken, of respect to the principles and purposes, among them, the sovereignty of the States, the non-intervention in internal affairs and the prohibition of any type of aggression”, he said.

In this regard, the Venezuelan diplomat called the attendees to reflect when he remembered Commander Hugo Chavez, who before the imperial onslaught ratified that “when there is a doubt ask yourselves who the enemy is, and if the enemy is imperialism there is no doubt that we have to support the people”.