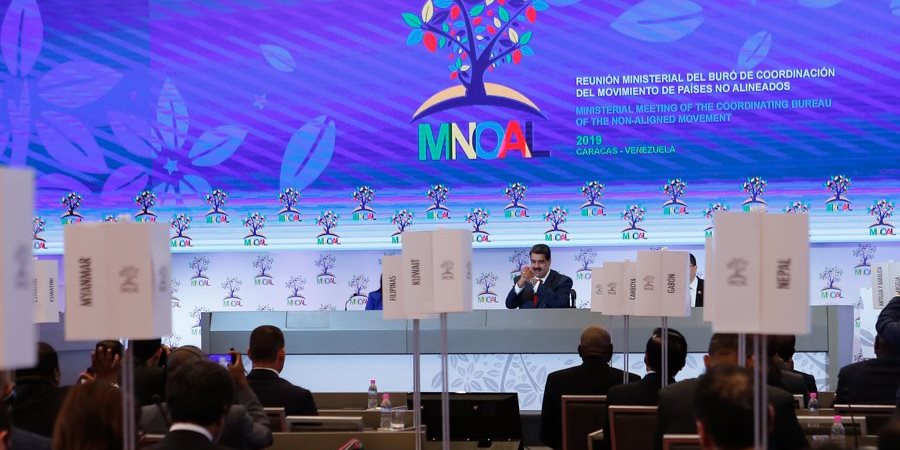 NAM reaffirms recognition to the Bolivarian Government of Venezuela

Congregated in Caracas in the framework of the Meeting of the Coordination Bureau of the Non-Aligned Movement (NAM) on July 20 and 21, the Foreign Ministers and senior officials of the organization approved a motion of thanks and solidarity with the Bolivarian Republic of Venezuela and its government.

The diplomats congratulated President Nicolás Maduro for his leadership at the helm of the NAM throughout the 2016-2019 triennium, during which he has promoted and defended the positions of the bloc’s principle, while he has redoubled his efforts in favor of the revitalization of the Movement and trying to strengthen the unity and cohesion of membership under a spirit of solidarity.

Similarly, they recognized the leadership of Foreign Minister Jorge Arreaza in conducting this Ministerial Meeting, which guaranteed the success of this historic event in which they reaffirmed their commitment to respect the postulates enshrined in the Charter of the United Nations and with the norms of international law to promote and consolidate peace.

The ministers and senior officials expressed their solidarity and support for the Bolivarian Republic of Venezuela, which has been the subject of interference policies, destabilizing actions and attacks that violate the purposes and principles of the Charter of the United Nations, International Law and the Declaration on the Relationships of Friendship and Cooperation between all States, to the detriment of their economic and social development and the full enjoyment of the human rights of their people.

The meeting of the NAM Coordination Bureau was held in Caracas under the motto “Promotion and Consolidation of Peace through Respect for International Law”.