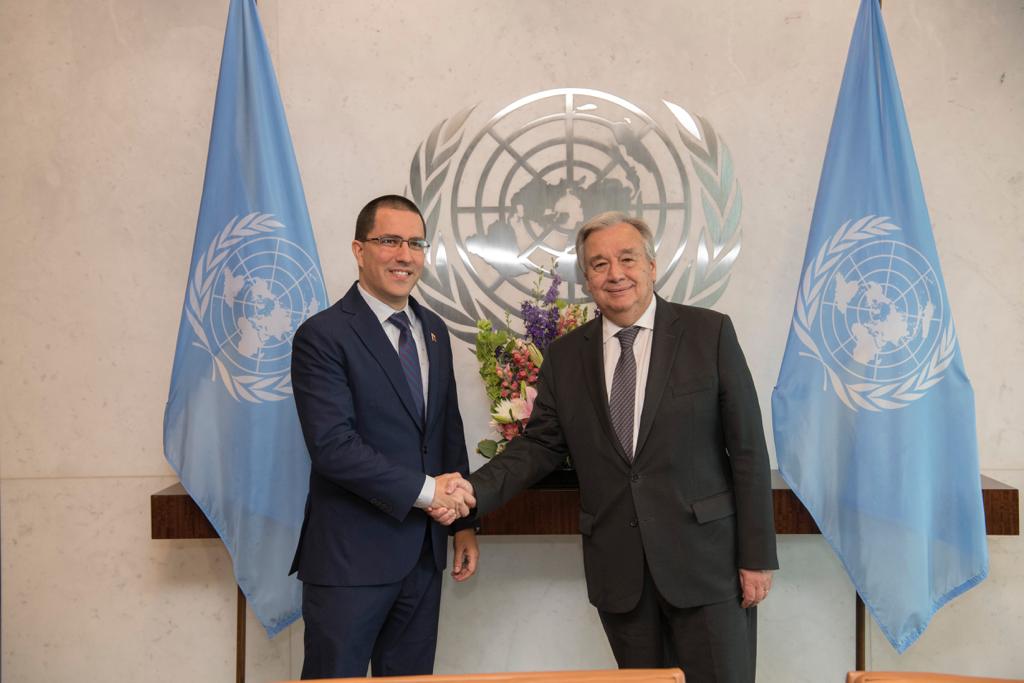 This meeting served for both diplomats to review the work agenda in order to strengthen cooperation between the Organization and the Bolivarian Government, as well as various elements of the world’s geopolitical reality, highlighting the forthcoming Ministerial meeting of the Coordination Bureau of the Non Aligned Movement, to be held next weekend in the city of Caracas.

During the Meeting with the Secretary General they talked about the need to advance in peace, understanding the Venezuelan reality and respecting the sovereignty of the country, for which he described the international opposition to the dialogue as an aberration and rudeness. Emphasizing that all countries should favor the process of dialogue, and not upset it.

For his part, the Venezuelan Foreign Minister expressed his gratitude to the UN for the support given to the process of dialogue and negotiation between the government and the Venezuelan opposition in Oslo, Norway, thanks to which a political agreement of coexistence is expected soon in Venezuela, pointing out that Venezuela must focus on the national will, without paying attention to international interference.

“We thank the Secretary General of the UN, António Guterres, for receiving us in New York. He expressed his full support for the process of political dialogue in Venezuela, facilitated by Norway. We review the joint projects with the UN agencies to deepen our cooperation”, said the People’s Power Minister for Foreign Relations.

Minister Jorge Arreaza said that the Bolivarian Government would be willing to meet at all levels with the US government, pointing out that the important thing is to reach a political agreement in Venezuela for peace, coexistence, tolerance.

During the last meeting held by both diplomats, held on January 16, Foreign Minister Arreaza expressed on behalf of the Venezuelan people and President Nicolás Maduro, the irreducible commitment to peace and the 2030 Agenda for Sustainable Development.