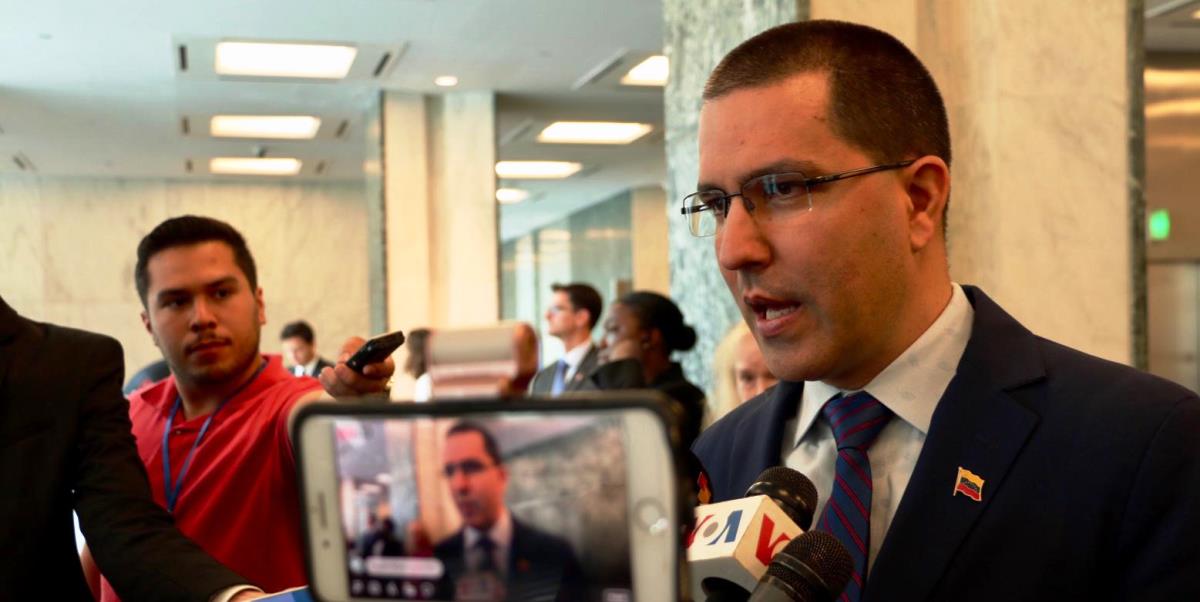 Foreign Minister Arreaza: international pressure against the dialogue process is an aberration

At the headquarters of the United Nations (UN), in New York, on Wednesday, the Foreign Minister of the Bolivarian Republic of Venezuela, Jorge Arreaza, offered a speech to the media after holding a meeting with the UN Secretary General, António Guterres.

For his part, the Venezuelan Foreign Minister indicated that one of the issues addressed during this meeting was the sabotage that the United States and its allied countries have against the process of dialogue in Venezuela.

“The situation in Venezuela is not the same as it was six or five months ago. Our country is at peace. They could not disturb the tranquility of Venezuela with all that bourgeoisie coup siege to seize power. We must respect the sovereignty of the country and let the parties understand each other. The international pressure against the dialogue process is an aberration to prevent the parties from reaching an agreement or working towards a political agreement”, said Foreign Minister Arreaza.

In relation to the recent threats of the European Union (EU) to impose new sanctions on Venezuela, in case of not obtaining concrete results in the dialogue carried out in Norway, the Venezuelan Foreign Minister replied that “the EU has no authority, no moral to interfere in the internal affairs of other countries. For 208 years Venezuela has been a free and independent nation. But much less has the right to cloud our dialogue process and try to sabotage it so the results are frustrated”.

At the same time, FM Arreaza said that “countries like Russia and China have expressed respect for the process of dialogue and mediation of Norway, and at no time have they interfered in the affairs of Venezuela”.

He also indicated that the Bolivarian Government is willing to promote the process of dialogue in all instances of the UN, including the Office of the High Commissioner for Human Rights.

“Despite our profound disagreement regarding the report of the High Commissioner, we must insist on dialogue and see Venezuela from its real perspectives, but not through non-rigorous instruments, where 85% of the information comes from interviews that were carried out outside the country, where conclusions are reached without any foundation. A review of this report would be useful to demonstrate the falsity of most of its constructions”, said the People’s Power Minister for Foreign Relations.

He also assured that “it seems that this report was the chess piece that countries that hate Venezuela, that want to see President Maduro out of power by force were waiting for, unfortunately the Office of the High Commissioner lent itself for this”.

On the other hand, the Foreign Minister said that before the unilateral positions that try to drown Venezuela, the answers should be sought in multilateralism. He also thanked the UN Secretary General for his support. He also thanked Norway and the government of this country for facilitating the dialogue process. He also mentioned the importance of the rest of the international community respecting this process of understanding.

Finally, Minister Arreaza emphasized that since last year, when the head of State Nicolás Maduro visited the UN, in New York, the Bolivarian Government expressed that it would be willing to meet with the government of the United States at any level. “I’m sure President Maduro would meet with the largest of the provisions with President Trump”.