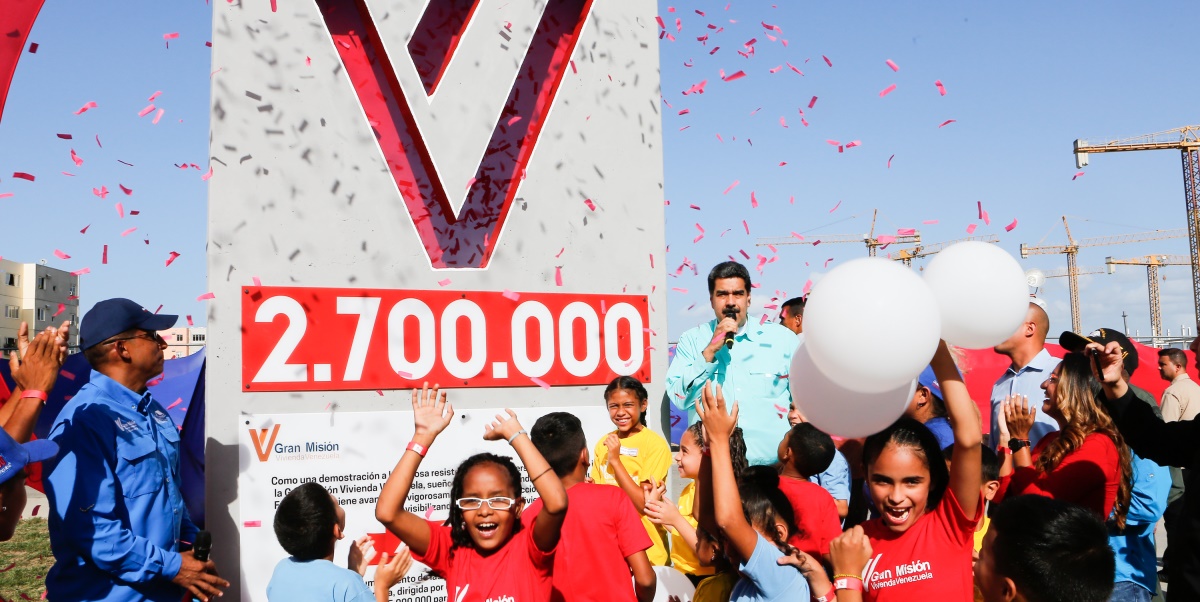 Despite the economic blockade the Bolivarian Government continues its march with the delivery of 2 million 700 thousand homes to the Venezuelan people, this Monday, through his Twitter account, @jaarreaza, the People’s Power Minister for Foreign Relations, Jorge Arreaza, congratulated the team of the news channel, Russia Today, and the reporter Erika Ortega Sanoja for reporting this achievement of the Revolution.

“Very good report of @ErikaOSanoja / @ActualidadRT on the Gran Mision Vivienda Venezuela and the 2 million 700 thousand homes delivered to the People by the Bolivarian Government, despite the blockade and the obsessive and criminal imperialist aggression”, said the Foreign Minsiter.

While Washington intensifies the economic blockade against Caracas, the Bolivarian Government continues with the social programs and achieves significant successes.

In Venezuela, the housing deficit has been one of the most serious problems of the population for decades. The heavy rains of 2010 left some 36,000 families homeless, aggravating the structural issue. To address the situation, President Hugo Chávez initiated the Gran Misión Vivienda Venezuela, a program to build 3 million homes in 9 years.

According to the People’s Power Ministry for Housing and Habitat, the plan is being fulfilled. During the efforts of President Chávez and his successor, Nicolás Maduro, more than 2.7 million homes have been erected. 37% of them have been done under the self-construction modality.

One example is the Amatina Urbanism, built on land expropriated from the Polar group of companies: 9 towers of 5 floors each, which today house 136 families.

Spokesmen of the popular movements consider that building houses in this way also involves the rethinking of the city and empowers organized communities. “Starting from the selection of the land, the location of the land, the struggle for the land, going through the participatory planning and design process of the community, with technical assistance from architects, engineers, etc, until the execution process of the work and the phase that we are seeing now, which is the collectively inhabiting of what have being built”, explained Juan Carlos Rodríguez, activist of the Settlers Movement.

53% of the land on which these houses were built were public. 47% were private. The People’s Power Minister for Housing and Habitat, Ildemaro Villarroel, told RT how to act in the latter case.

“First there is a decree of urgency, of emergency occupation, to take it and do the soil studies. If it is eligible for the construction of houses, a decree of temporary occupation is made to start the works while the whole process of expropriation for public utility in urban and peri-urban areas”, he explained.

The reaction of those who assume ownership of the land is usually to sue the State. Few cases have prospered. Priority is given to those who, according to the Constitution, have the right to decent housing.

Government spokesmen affirm that despite the serious effects, which they claim has caused the United States blockade against the nation, the goal of delivering 500,000 homes this year alone will be achieved. If so, 3 million families will have received a home in the last 9 years.