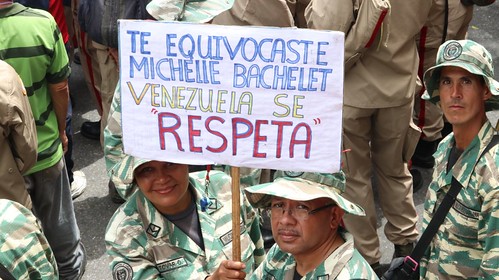 Vice-president Rodríguez urged Bachelet not to lie about Venezuela

From the corner of Carmelitas in the center of Caracas, the Executive Vice-president of the Republic, Delcy Rodríguez, addressed to the people who arrived at that point of the capital after making a march in rejection of the report presented by the High Commissioner for Human Rights of the United Nations (UN), Michelle Bachelet.

There, she denounced the bias of this paper about the Homeland of Bolívar, where the advances of the policies of attention to the people and other aspects were made invisible in said document.

During her speech at the popular rally, Rodriguez said that the report distorts the social programs developed by the Bolivarian Revolution to meet the needs of the most vulnerable sectors.

For this reason, the Executive Vice-president reiterated the request of the Venezuelan State to rectify this text.

She stressed that in matters of human rights, Venezuela has much to say, based on the fact that “it was the Liberator Simón Bolívar who set the foundations of an egalitarian Republic”.